This morning while cycling down Bode road, I saw these guys playing Bocce ball. The fact is, I didn't even know the name of the game until I looked it up on the internet. 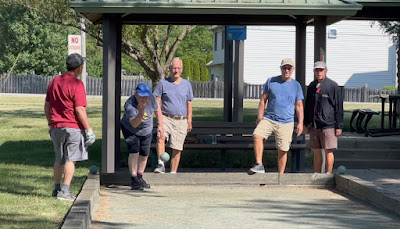 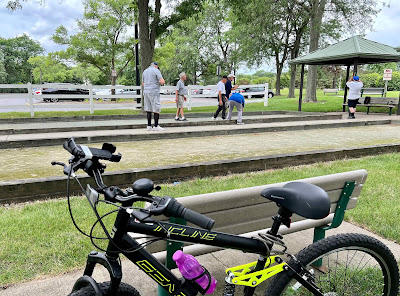 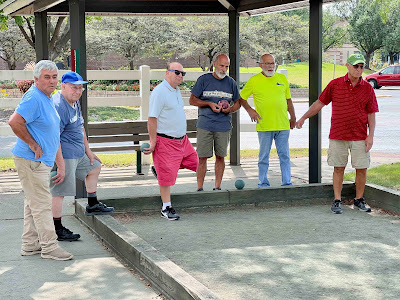 It is one of the ball sports under the boules family. This game can be conducted between two players or two teams. The small white ball known as the Pallino (also known as Jack) is thrown first. 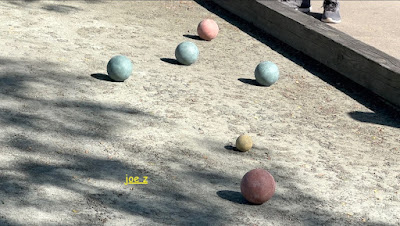 Then each member throws their individual ball, to get it as close to the Jack as possible. All throws have to be made underhand. 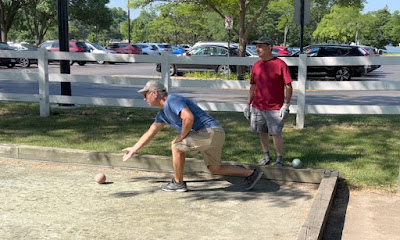 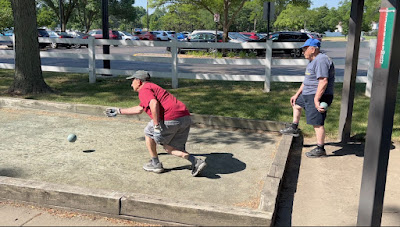 Once all have thrown their balls, they make a visual study to determine who is the closest, and points are decided. 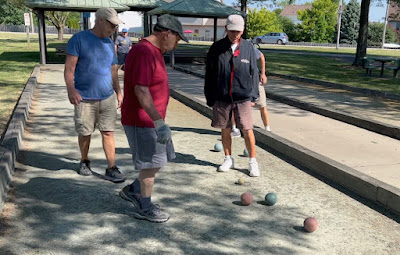 If there is a dispute, a measuring tape is used to determine the distance from the Jack. 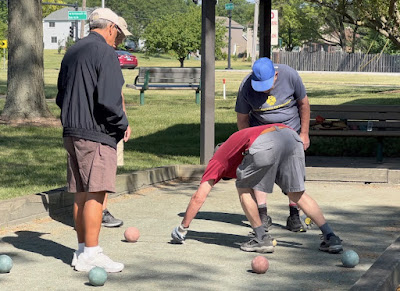 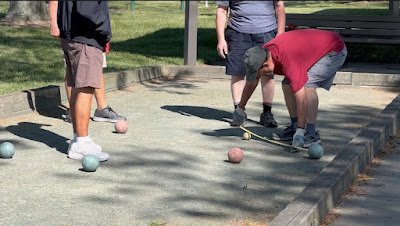 The rules are flexible as long as all participants agree to it. After observing them, I realised that the rules they were following were similar to the game of goti (marbles) that we used to play during our school days. The scores are updated after each game. 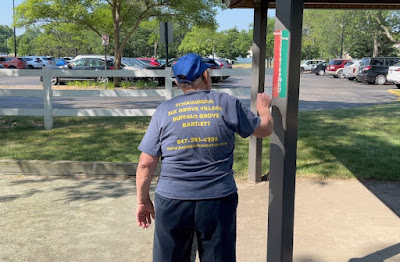 The history of this game is interesting. Bocce Ball spread throughout Palestine and into Asia Minor. . . . . . In 600 B.C., Bocce was picked up by the Greeks and passed to the Romans. It was played everywhere, from the churches and castles to the city streets. People from all walks of life could play the game; young or old, man or woman. In 1319 A.D., Bocce Ball was actually prohibited to people of lesser nobility because it was felt that it diverted attention from more important tasks, such as archery and war training.

As of today, it is an event in the Special Olympics, and is being proposed to be in the Olympics.

. Made a short video from what I captured.

On the way back, I saw this bird. I presume it is a young one of a Northern Cardinal (or is it a Rose Finch?) 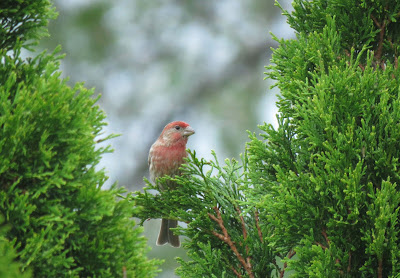 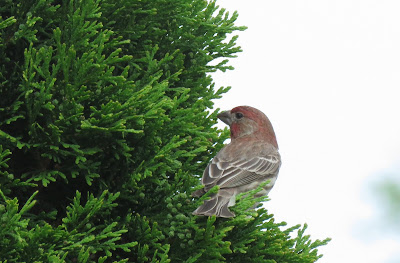 The history is interesting, thanks. We used to play the occasional game with family. We still have a set of metal bocce balls.

I have learnt something new. Interesting history - Beena Beliappa

I don’t know if this is the same or different than what is called lawn bowling here, I have never played either game.

There is a local park near us where Bocce Ball is regularly played. I loved the birds that also brightened your day.

That looks like a fun game. And the Rosy Cardinal is <3

The cycling jaunt was quite an exploratory journey I see.

Wishing you a great weekend on the saddle too, Joe.

I'd forgotten that we used to have a Bocce Ball set. It's a great game that anybody can play.

I don't know what kind of finch that is, but great shots. It kind of looks like either a House or Purple finch (which is what we have around here), but they look so much the same that I can't tell them apart.

We have a set of bocce balls but it isn’t as fun playing on a grassy lawn.

Carla from The River said...

I have played Bocce Ball once, and it was fun. Fun post!

Interesting, I've never heard of that game before.

I've seen Bocce Ball sets (back when I worked at the evil toy store), but I've never seen it played. Looks like fun.

What a great game, not too physical so can be played by a broad age range. It's similar to our game of Bowls, which I'm certain is a development of Bocce Ball. 😊