Some people have inspirations. But to bring that inspiration to reality is the real hard part.
But once you have the zeal and determination and passion, you can make it happen.
All this sounds like some pep talk isn't it.
Well I have seen one person who has that passion. He is just like a child when he is talking about his project. Full of animation and enthusiasm.
His idea was very simple. We all take our food carrier to work. (well most of us) But by the time its lunch time and we open the Tiffin we find that the food is cold, and nothing like putting you off food when it is cold.
Not everyone is equipped with a microwave or hot plate at office. So he came up with this idea of how to keep the food hot and that too at the right temperature.
His ideas were simple and he knew that it had to be cost effective. He and his team worked at it in his workshop and finally came up with his product. Mainly two variations of the same product. 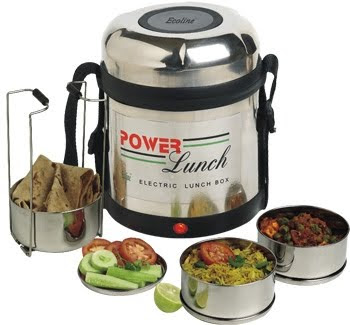 The first one (above) was the Ecoline Power Lunch where in you just plug in your Tiffin for about an hour before you have your food. And the cost of the electricity consumed is just 15 paise per hour. (Power consumption 20 Watts) 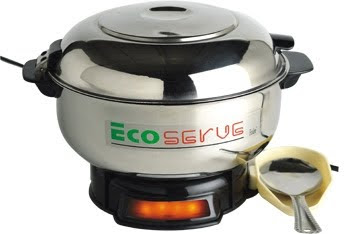 I liked the second variation better. It is the Electric Modular Buffet System.
To put it in a better way, when we go for a buffet lunch (or dinner) we have seen those skilled cooks making Rumali roti and throwing the dough in the air and expertly catching them. Every time they throw it, we find it getting bigger and bigger.

Frankly speaking Rumali Roti has got nothing to do with this but we have seen those fancy looking containers kept in a neat row with the waiters standing behind “madam would you like to have Dal Makhni or Nargisi Kofta?” 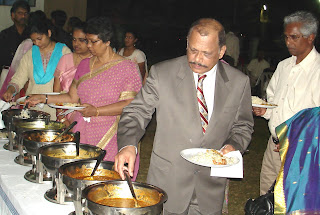 You take your pick and also make a note of the small spirit lamp that is burning below the containers. Well our friend here has managed to do away with those spirit lamps.
He has serially connected those containers and one end is plugged to the mains. The food remains hot at the right temperature.

The construction is a double walled thermal insulation which retains the heat and conserves energy. The result ? Zero pollution with no carbon emission.
Care has been taken while designing, that a spoon holder is attached to each container. 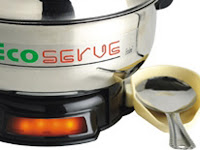 And you can punch in the name of the item in the container which is finally displayed digitally. So there won’t be incidences like “Hey this does not taste like Gobi Manchurian”
“Sorry madam, the display cards got interchanged” !! 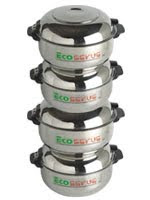 The design has also taken care of the need that this can be stacked when not in use.

The present size of the Electric Modular Buffet System is suitable for having parties at home.
In a recently held exhibition in Pune (Utsav) he had put up his stall and it was no surprise that his stall had the maximum response as it was a totally new concept in this city.

Before the exhibition was over he was felicitated by the Governor of Maharashtra for ‘Innovative Ideas and Business Excellence in Small Scale Industries’ which was held in Le Meridian Hotel, Pune. He was one of the 14 recipients from all over Pune.
A web site is available wherein you can get more details and contact info.

And here is the man responsible for this. Mr P G George 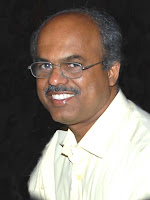 As children we used to gaze at the clouds and try to give some shape to what we saw. It was fun and you can allow your imagination to run wild. My Dad was good at picking up shapes: “Do you see a man smoking a pipe sitting on a cliff”
Well, today you can see the clouds from above, thanks to the Wright brothers.

Whenever we flew from Bombay to Cochin we used to take the early morning flight and it’s a wonderful sight to see the sunrise from high above. ( window seat is a must for me )
The diamond ring effect (usually seen in an eclipse) was seen here with the sun behind the wing of the plane.

That is another thing that always fascinated me. The wings of the plane and the flaps. We take it for granted that the pilot is doing a good job and the take off and the landing went smooth. But if you look closely you can see the ends of the flaps going up or down depending upon the take off or landing. And they are in turn controlled by numerous hydraulic shafts and cables. Those flaps are real huge when seen up close. Going into technical jargon would be, out board flaps, Inboard Aileron, Slats, Spoilers etc. 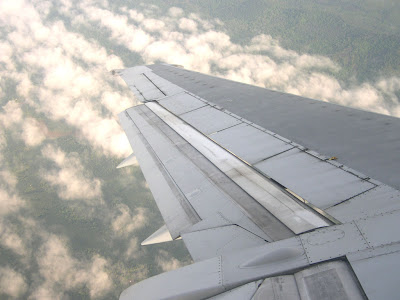 The birds too must be using the same technique to navigate.
Once while landing at Cochin there was a thick layer of cloud very low and the pilot had made three sorties trying to land. Every time at the last minute he (the pilot) used to pull up and take off again. It was scary. But most of the passengers were not aware of what was happening (including my wife) It was only before the third try he announced “there is a slight problem in landing and if we can’t make it we will be landing at Chennai”
But thankfully he made it at the third attempt.

One of the Airlines that has really impressed me in India is Kingfisher. The rates may be a little steep when compared to others but its worth the money. There is no room for complaint. And to top it I won a Zodiac Shirt by just filling in those forms they keep in the magazine pouch behind the seat. So next time when you fly don’t miss that opportunity, who knows when lady luck will smile at you. 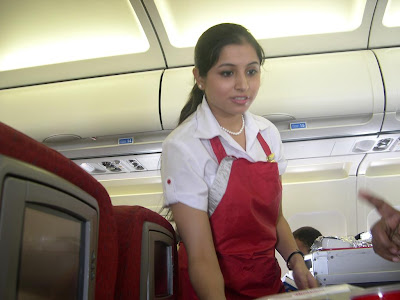 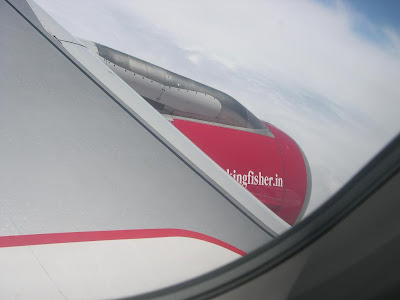 Cochin airport is one of the cleanest one I have seen in India. It is a rare sight to see all the seats vacant at any airport, at the waiting lounge. I had to click it.

The sunlight coming in from the airplane window can make a good silhouette. I looked up this word and came up with this:
A silhouette is a view of some object or scene consisting of the outline and a featureless interior. The word is an eponym named after Etienne de Silhouette, a finance minister of Louis XV who in 1759 imposed such harsh economic demands upon the French people that his name became synonymous with anything done or made cheaply.