Was always fascinated by comic books.
When you look back, its probably because of the visual treat that you get while reading a story. And I was more fascinated by the quality of the drawings that were produced in these old comic books.

Not that Tin Tin and Astrix were bad. In fact my pseudo name in this blog Haddock is my favorite character Captain Haddock from Tin Tin.

I was so fascinated by Rip Kirby that I decided to draw the character Rip by magnifying it ten times. So I set about the task of drawing grid lines (in pencil) on the comic book and painstakingly reproducing it. Once I was satisfied, I inked it with a simple black sketch pen. This was done about 25 years ago.

Once I realised that I could do this enlargement bit, I tried it out on another character from the same comic book (I don’t remember her name) but it did not turn out so well. So I stopped it at that and dropped Desmond (Rip’s butler) from being enlarged. (poor Desmond)

Now that I started dabbling with Photoshop, I thought of doing the same in the soft form. Tracing my original work in Photoshop took some time and I must say there are many things that I have yet to learn when it comes to these software tools.
After all learning is a continuous process. 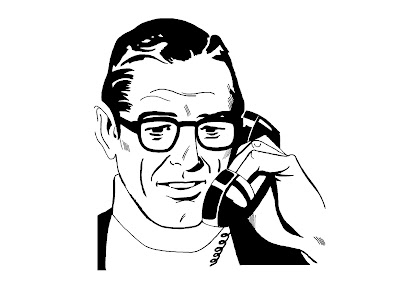 Coming back to reading, I think the best thing that happens when you read a book is that you start to visualize the scene in your mind. But when you watch TV that freedom is curbed as you are forced to “see” the scene that is depicted on the screen.

No wonder they say “What a treasure of books” The treasure is not the books but the freedom of visualization.
Posted by Haddock at 9:39 AM 25 comments:

Saw an ad in the telly. A boy having his breakfast, fiddles around with his poached egg and asks his father "I heard that we are not supposed to eat eggs in summer as it generates more heat" His father replies that he never heard anything like that and counter checks with the boy's grandfather. The grandfather also answers in negative and passes on the question to the boys great grandfather (all sitting at the same table)
The great grand father also answers in the negative with a smile and says that he too had never heard anything like that and has been having eggs through out his life. (the ad was for promoting the consumption of eggs and to say that egg is vegetarian)
What I liked about the ad was the smile of the great grandfather. He was none other than Dara Singh. Yes the famous wrestler of yesteryears who later got into the movies and churned out a lot of Bollywood movies like King Kong and Rustom E Hind.
Talking of Dara Singh reminds me of an old photograph I recently saw in which the Gandhi family was there along with Dara Singh and Randhawa Singh (Dara's brother), but the one on the extreme right is the one to look out for. Yes the evergreen Amitabh Bachan. It's a rare picture I must say. The old bollywood hero and the latest one. Came across this in one of the forwarded mails. 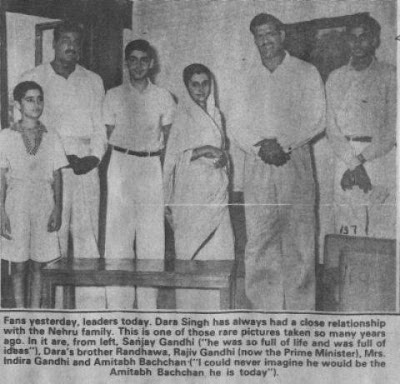 For those who can't read the fine print, they are (L to R)
Sanjay, Randhawa, Rajeev, Indira, Dara, and Amitabh
Talking of pictures, I joined a site where you can upload your photographs which is viewed world wide.
If the photographs/illustrations are good, people buy them for designing web sites, blogs etc and you are paid in dollars. I joined recently and have uploaded 6 of mine out of which one got sold.
For more details click on the icon on the top right (Dreamstime) and read through. If you feel that that your pictures are worth uploading then register yourself and start uploading. (registration is free)
Posted by Haddock at 7:25 AM 26 comments:

It is good to see that more and more people are concerned about their health.
Went for a walk early in the morning. I think the best time to go for a walk is in the morning. The reason being less vehicles (so less pollution) and the rays from the rising sun is good for health. (far infra red rays) A word of caution is to keep your mobile phones and watches/valuables at home. 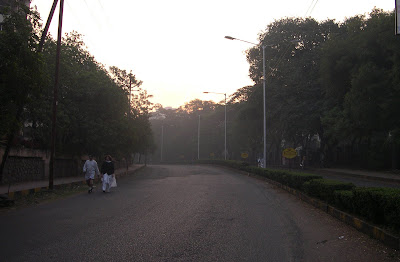 You get to see the morning paper vendors busy sorting out the papers according to the delivery. I noticed that they were shoving in a lot of hand bills/ pamphlets in the paper. A slight extra income for them but a little irritating for the people who settle down with their morning cup of tea and out falls a handful of the hand bills when you open your morning paper. 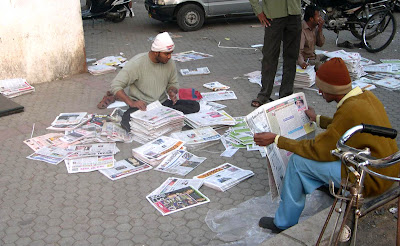 On the way there is a huge open space where I could see a group of senior citizens doing their little bit in the form of exercise and laughter. Probably they are a part of the laughter club as I could hear them laughing away to glory at regular intervals. It was really interesting to halt and watch them. Everyone doing their bit (as it is not easy to bend and stretch at this age) And at the end of it all there is a cake to be cut for David uncle’s birthday or Mr Joshi is distributing sweets as he is a grandfather now. 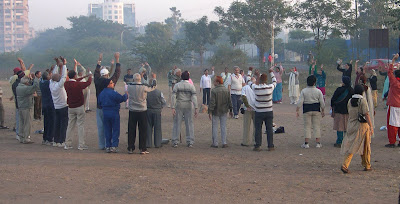 Young couples go about with their brisk walk. What the experts say is that if you can cover one mile in 15 minutes then you are OK. If it takes less, you are fine, but if its more then your cardiovascular system is not up to the mark. 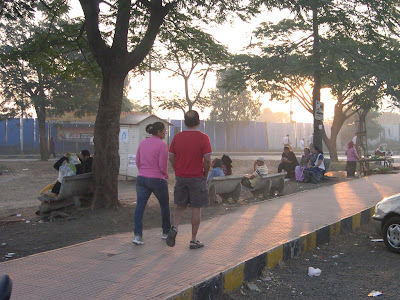 Talking of cardiovascular, a lot of people are joining the Gym and that could be the reason why Gyms are sprouting up everywhere. Some observations that I made in the Gym are that many (especially the young) come with their mobile phones. They are busy either talking or texting. I think no one is going to miss them if they are off the phone for an hour. So leaving that instrument at home would be more helpful to them (and less disturbance to others)

Then there are some who insist on taking the elevator to go to the Gym (even if it is situated on the second or third floor) I mean if you are going for a work out and sweat it out, why not start from the ground floor and use the staircase? It will definitely add up to the warming up (and save power too)

Coming back to the morning walk, passed by the basketball ground and felt good to see these boys engaged in their game. Incidentally this is the second fastest game in the world, the first one being ice-hockey. 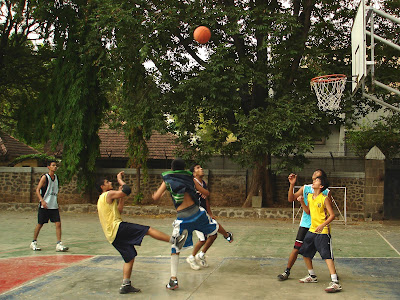 Saw a father trying to teach his son football in one of the school grounds. (they are in the middle of the ground and far away) 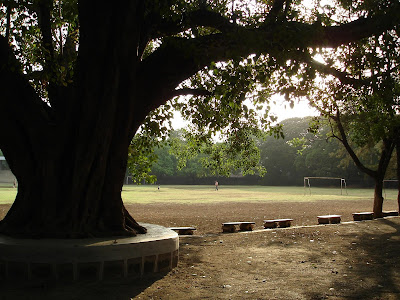 As the day progressed, the number of vehicles kept increasing on the road.

Once upon a time Pune was known as the city of cycles. Then it gradually got replaced by the mechanized two wheelers. Now it is a mad frenzy of four wheelers and no roads to match.
Talking of cycles reminds me of an article I read where Mr Joe Simonetti of New York cycles down to his work place twice a week. The distance ? 44 miles !!
Posted by Haddock at 7:55 AM 44 comments: