Of late there were a couple of movies released that promoted sports in one way or another and one such movie is Kesari.
Happened to see the movie yesterday and liked the way the whole theme was handled.

Shooting the movie on actual locations gave it an authentic look.

The success of a movie depends on the selection of the characters and I must say that almost all the characters in this movie were perfect. Except for Mahesh Manjrekar, Mohan Joshi and Vikram Gokhale, the rest were all new faces for me.

The love for football by Virat Madake (who portrayed the wrestler) helped him in moulding his character as it was easy for him to transform from a sportsman to an actor. His Kolhapur accent also helped him in maintaining the script requirement.

Talking of language, my observation is that movies (or stage shows) made in Marathi, Bengali or Malayalam allows the actors to emote better due to the richness of the language. It is good that they had English subtitles as that would help in getting more audience. (a few years ago I enjoyed  Kaaka Muttai which had subtitles)
Got to see Malkhamb practice after a long time. The last time I saw my friends practicing in Pune was in the mid seventies.

Among all the exercise that the Pehlwan had to undergo, pushing that motorcycle must have been the most strenuous. Those who have pushed a Bullet will know.

The music by Prafullachandra is worth mentioning as it was melodious and appropriate to the scenes.

Finally I would say that the whole credit goes to the director Sujay Dahake, as getting the best out of the actors solely depends on a director. 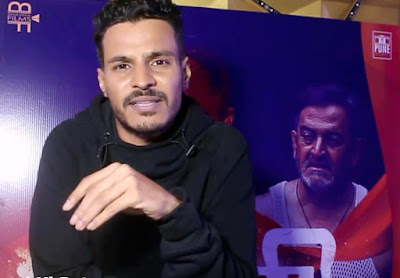