I would have liked to meet Mr Habban as he could have updated me about Jesus Christ. But that was many years ago and I would have to be in a time machine.
After the death of Christ, Thomas got acquainted with Habban, a merchant of King Gondophare of India.
It was with Habban that he (St Thomas) travelled to India in 52 AD and landed at the south coast of Craganore (present day Kannur) in the State of Kerala.
After building seven churches along this coast, he travelled to the eastern  side and took shelter at Parangimalai which is now known as the St Thomas mount.
Had been to Chennai last week and made it a point to visit this mount and the surroundings. It was tough locating the place and I found that the railway station itself had two names, Parangimalai in Tamil and St Thomas mount in English, a first of its kind as the names of the stations are usually the same in any language. 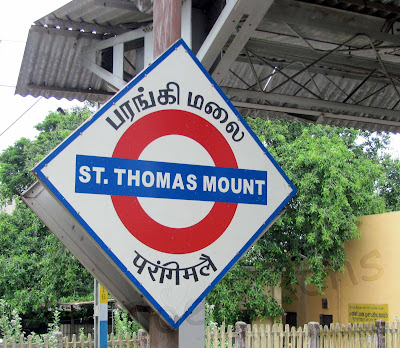 There is a flight of 134 steps from the back side and I took that path instead of the road that is available now. Though the climb is steep, it is worth the effort.
From the mount one can see the planes landing and taking off from the Meenambakam  or the Chennai International airport. 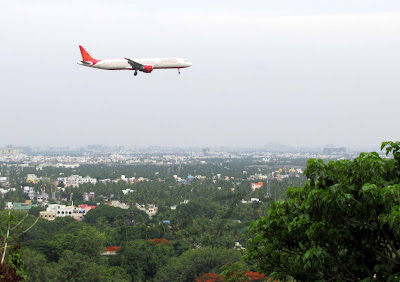 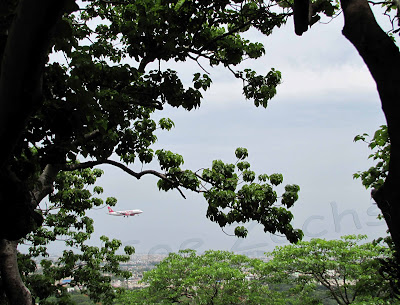 Interestingly this Mount comes under the Cantonment area Pallavaram which is also the second oldest cantonment in India.
I spent some time inside the church (or rather the old chapel which was the original one) 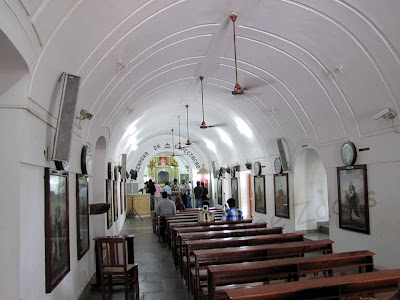 It houses 100 relics of the 12 apostles including the toe bone of St Thomas. 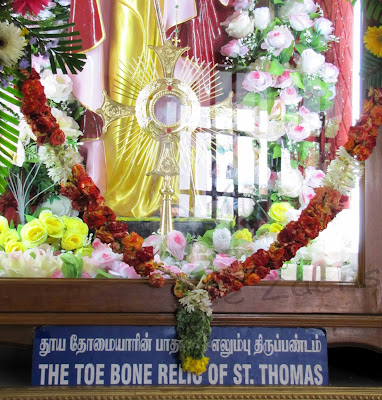 Noticed a family moving about very reverently and they spoke in  Marathi the way the Kolis (fisher-folk) of Mumbai speak.. 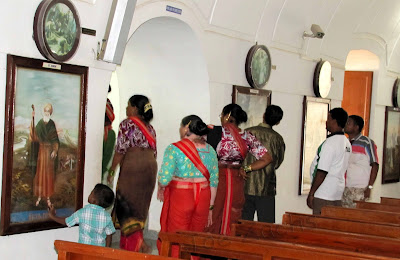 I spoke to one of them and he said that they came all the way from Vasai - Mumbai for this pilgrimage. 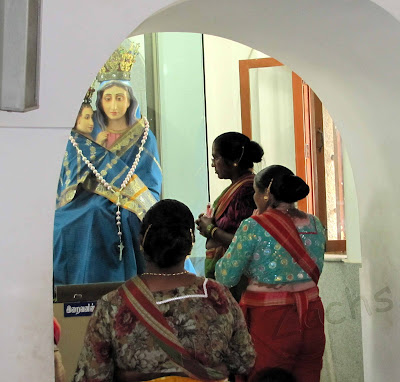 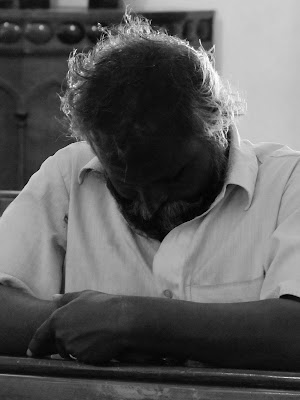 In the church compound I saw a banyan tree which is 175 years old. 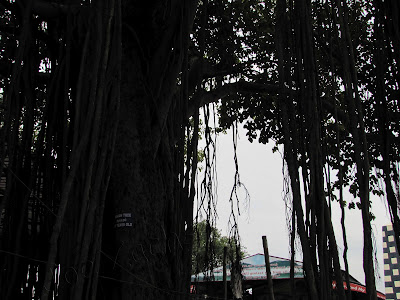 One has to obtain permission to click pictures, but it is not an issue as they give permission to anyone on payment of Rs ten for which you get a receipt. 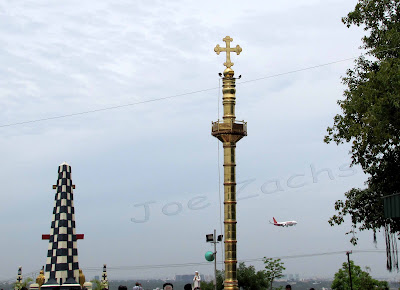 There were certain signs and guidelines put up at places, like this one for example which is self-explanatory (or is it?) 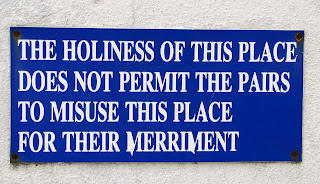 There was a time when you wanted to enjoy music, the options were limited. The only audio source was the radio. Most of the time it was  AIR (All India Radio), or if one had a good band spread (like a five band radio) then one was lucky to get Radio Ceylon or VOA (Voice of America) or the BBC. 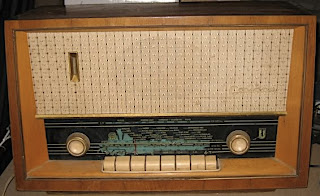 Coming back to the AIR, I enjoyed listening to some selected programs and one of them was a fifteen minute slot for instrumentals. Somehow I always preferred instrumental to the actual singing. Some of the famous instrumental players of those times were Enoch Daniels on the accordion and Van Shipley on the guitar. It was a pleasure to listen to them, even during the time when there were no stereo recordings. 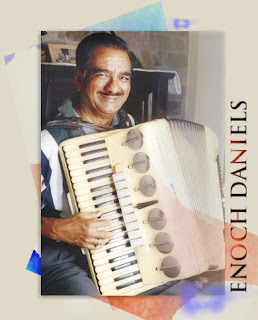 As for the accordion I always wondered how they coordinated the movements of pressing the keys with the right hand and the bass buttons with the left hand. And that puts a thought in my mind, how does a left handed guy play an accordion?
Recently I was fortunate enough to be introduced to Enoch Daniels by a mutual friend. When I told him about being his fan, he narrated his story about how he almost joined the Indian Army, till one of his close friends pointed out about the choice of career and his God given gift of creating music.
That made him think twice about joining the Army and from there on it was smooth sailing for him. He was one of the first to introduce the accordion in India.
Here he is with Van Shipley and Talat Mehmood during one of their trips to Europe. 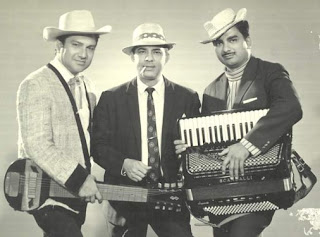 I think he is the only artist who was selected by Columbia to cut 40 records (all solo) This was after he was ‘noticed’ during his performance at the Royal Albert Hall London.
With Mohammed Rafi, one of the best singers India had. 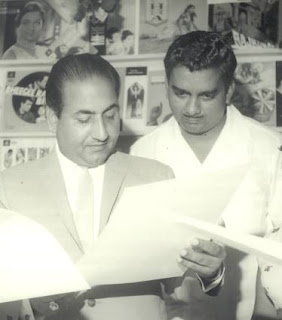 I must say he looks good and moves around very briskly for a person who is almost eighty. He was ready to change location for a better background when our mutual friend tried to click us. 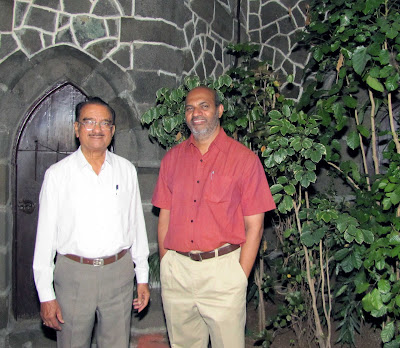 I wanted the pictures to be sort of ‘candid’ but it turned out that I was the only one looking candid while Enoch did not play his part of being ‘candid’ :-) 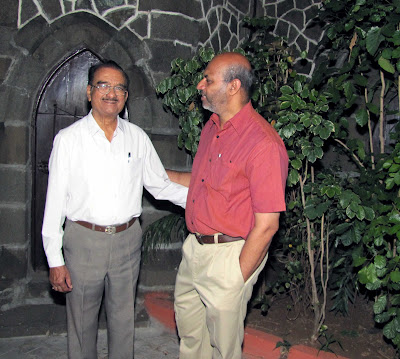 The background here is the 145 year old  St Paul’s church in Pune,  one of the well maintained churches that I have seen. 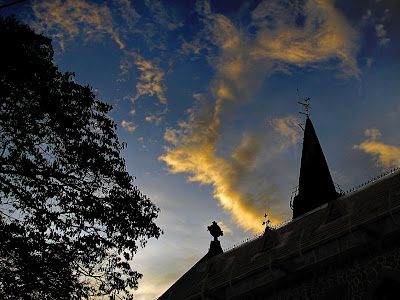 More on the church and the 100 year old pipe organ in my next post.