They say that if you want to know the history of a place then have a look at the cemetery first. So one morning I pedaled down to the cemetery and found the origin of the name Schaumburg in Illinois. 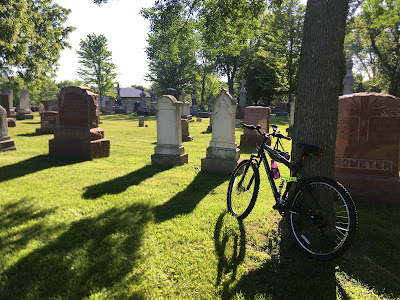 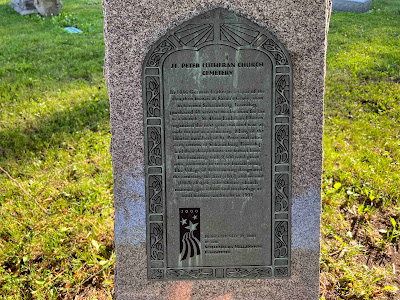 The original 1842 township survey, names the grove as Sarah's Grove. Three families lived near a grove of woods on the northwest end of the township, and each family had a woman named Sarah (Sarah McChesney, Sarah Frisbe, and Sarah Smith)

At a township meeting in 1850, citizens debated new names for the town. A wealthy landowner named Friedrich Heinrich Nerge, at one point during the meeting, slammed his fist on the table and said in German, "Schaumburg schall et heiten!" ( "It will be called Schaumburg!"). At that point, the township became officially called Schaumburg 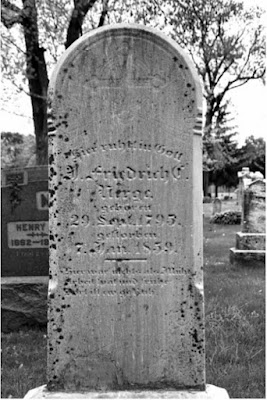 Above Black and White picture clicked by Duane Rapp

German was the first language of the majority of households until the 1950s. 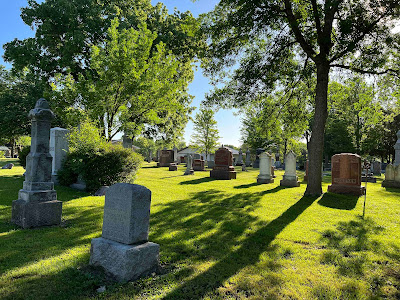 Lightning struck the church steeple on July 11, 1904, and set it on fire. The fire, which burned slowly downward, was extinguished by the bucket brigade. 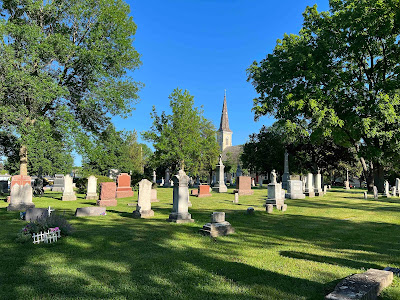 But the steeple was destroyed and had to be rebuilt. The bell was cracked and made useless. In 1956 the Men's Club replaced the bell and memorialized the founders of the congregation by placing it as a monument on the front lawn of the church. 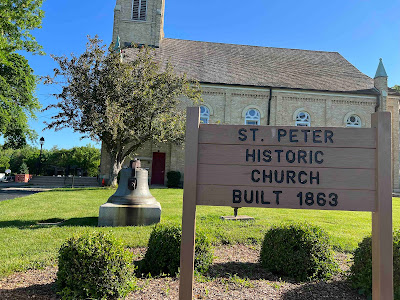 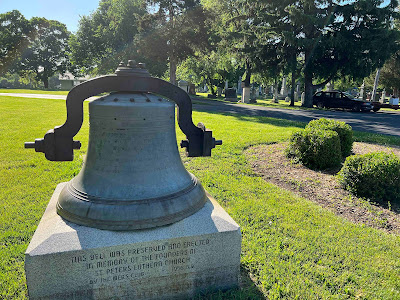 The Schaumburg Center School was one of the five public schools founded in Schaumburg Township in the 1870s. 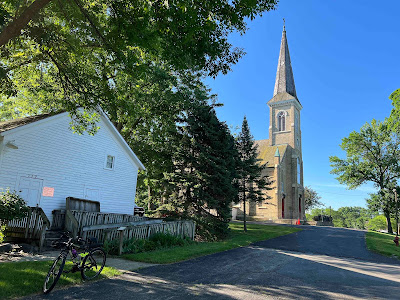 Originally located at Schaumburg Road, northwest of Roselle Road, (and numbered as 54) it was moved in1981 and restored on its current site on St Peter Lutheran Church property. 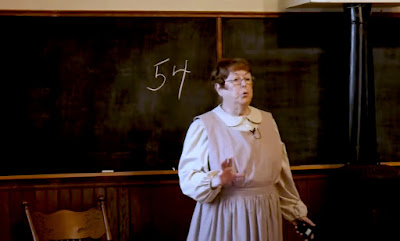 This one room schoolhouse is owned by the Village of Schaumburg and is leased to Schaumburg Township Historical Society. Unfortunately I could not have a look inside as it was closed for repairs. 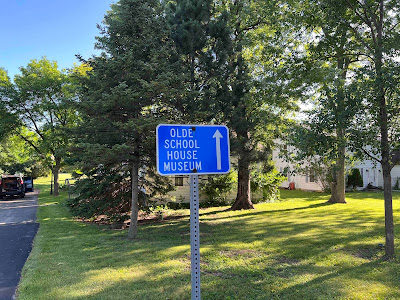 Made a short video of all that I could capture in the morning. The squirrel at the cemetery lawn was eyeing me suspiciously "should I share my breakfast with this guy on a bicycle?" 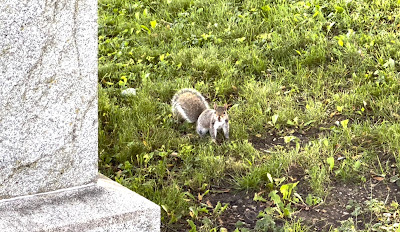 On the way back I noticed these birds (a Great Blue Heron and Swallow)  in the grove. (things that we don't notice when we zip past in a four wheeler) 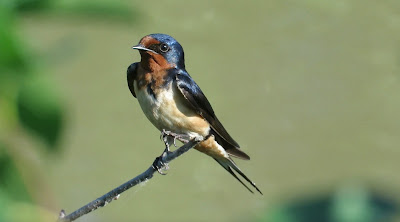 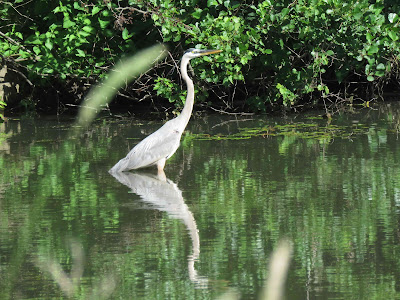 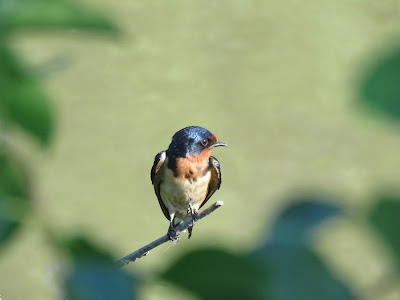 I almost always read up on the history of any plaice I spend a bit of time at.

Well, that's one way to name a town.

Very nice Joe. I am glad you are able to discover the history of these little places. Lovely blog - Dr Nandini R.

Beautiful blog, Joe. You have managed to capture the beauty and peace of the cemetery.

Joe, I loved the historical details you brought out with the video recording. What a wonderful old church building solid and standing tall till this date. Thanks for sharing. - Elizabeth John

An experience of historical interest ...a unique satisfying one

I’ve heard of the town, but not sure if I’ve been. Looks very lovely.

The birds steal the show.

Thanks for sharing some history along with your photos. I enjoyed reading this post and seeing the photos. Have a wonderful evening.

Haddock, Ahhh...memories! My wife and I lived in Mt. Prospect for over 27 years and we spent a lot of time in Schaumberg either dining out, shopping or visiting friends. Thanks for the history lesson. Nice bird photos too... Take Care, Big Daddy Dave

I'm amazed at the state of this church and cemetery, it has been preserved so well. It looks like people who are at rest there have truly been honored and have been remembered. Something I can't say for the churches where I live and it hurts to see.
Thank you for this wonderful video that reminded me that people still care for their loved ones after they've moved on. - comment by ATravelerofWorlds via YouTube https://www.youtube.com/channel/UCf6RZpT-9vt9avDP-2JuGUA

I thoroughly enjoyed the photos, history, and video that you shared. I have family located less than 30 minutes away from there. Nice post.

Thanks. I lived in the neighbourhood town of Hoffman Estate for a year. While my office was in Schaumburg. I used to work for L&T infotech then. - Aubrey Corda (ANZA)

Beautiful. Sarah name is very famous due to terminator One. - Addal K R

Hello Haddock, first thank you for your recent visit and comment on my blog recent post. I always enjoy and appreciate visits from fellow bloggers. This tour has been very informative and it is always interesting to fine out more about the history of a place. I also spent time reading older blog posts, but did not comment on all. You are right in that you can see more in 2 wheels and going slower then in a car.

I enjoyed reading about the history.

Loved the photos too.

I enjoy exploring old cemeteries and seeing the different dates and inscriptions on the tombstones. Sounds like an interesting history lesson!

This cemetery looks green and groomed and kept up. I've always thought cemeteries were a peaceful place. I miss visiting my mom and dad's site. You got so close to that squirrel, Yikes! I don't like squirrels at all. The red flowers were so pretty and the bird photos you took are wonderful. I like that school house too. It made me smile, as I was a teacher's aide for a few years.

Wow Joe ! First I thought that you had reposted this article. Then at the end I realised it was you in person. Great guy ! All the best mon ami - Melville Almeida

Lovely. My uncle used to live in Schaumburg.

Thanks for sharing your experience there. I've been to Chicago many times, but we've never really taken the time to explore Schaumberg. Maybe we'll venture that way on our next trip to IL.

I enjoyed reading about Schaumburg and looking at your beautiful pictures, Joe. To be honest I'd never heard of this town before. You seem to be having a great US visit and we're benefitting from it!