Of late I have been trying my hand at Stop Motion animation and found it very interesting and challenging. This morning I saw this crocheted Unicorn that wifey just completed and was wondering "how can I animate this?" 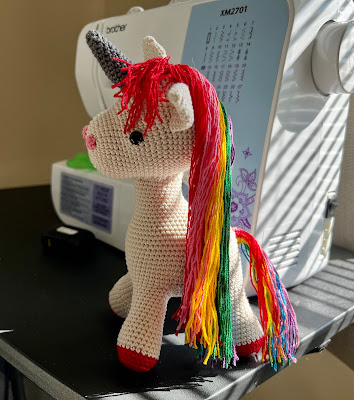 I almost gave up the idea when I found that the tail was touching the ground and that gave me the idea of how to make the tail swing. 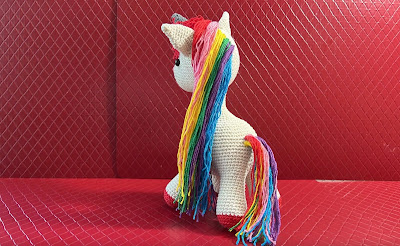 I have been using the toys and items used by my grandchild and every item has a potential of being in the stop motion video. For example this auto rickshaw can go very well with the lego toys.

One of the soft drinks that comes in the tetra pack is another item that you can play with. If the drink was in a darker colour like red or orange, the visual appeal would have been greater. To make it more appealing I stuck Mr Buster moon on the backdrop. 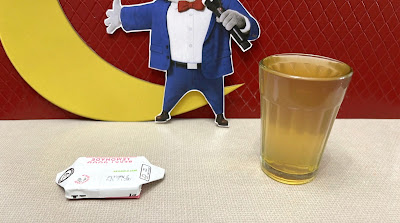 I wanted some heavy weight that would go into the M&M's container (so that it would not shift its position every time I rotated it). After searching high and low in the house, I found my cylindrical power bank which fitted perfectly in it. 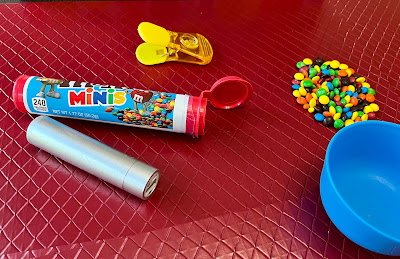 Keeping the object back in its original position is very critical and that was a tough call for me to snip off a section of the tetra pack and keep it back after every shot. 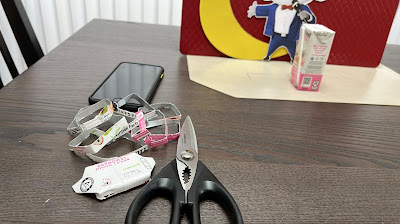 The usual practice for any movie is to write the story line and then animate accordingly. But for me I keep changing the story as I shoot. For example this station master was waving the green flag as the engine was approaching but as the engine passed him, his flag fell down. 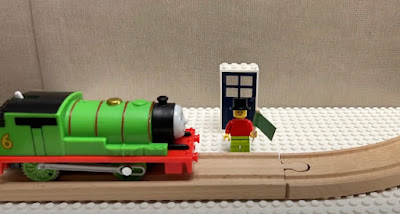 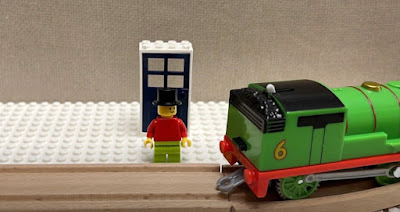 As I had fixed the flag delicately with a toothpick in his hand, I was in no position to refix it, as the slightest disturbance to any of the items in the scene would require reshooting the whole story from start. So I changed the story wherein he goes to his cabin to get a new flag.

Another example of changing the story was that I overlooked the blue bowl on the left side of the screen while making the M&M's video. So I included it at the end of the story by adding it in the right side of the frame. 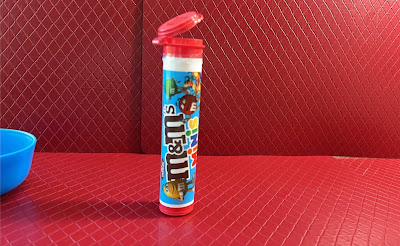 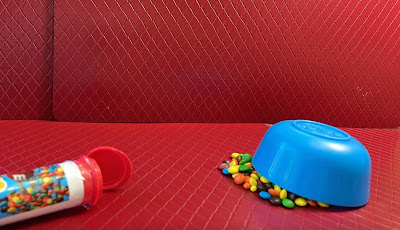 Shooting a stop motion video is easy and any one can do it provided you have the patience. (yes patience is the key word) You don't need any high end camera. It can be captured even with your mobile camera and with the help of the light from a reading lamp.

All non moving parts should be fixed/taped down. If using a mobile camera, keep it on Airplane mode and the Auto lock to 'Never'

Adding the right sound effects makes a lot of difference, like the steam engine approaching or the popping sound of the lid of the M&Ms container.

I used the Stop Motion App to make these videos I have not used any props / armature for these videos and plan to proceed this way. It is the idea that matters.
Posted by Haddock at 9:42 PM

Excellent! Also fascinating to learn about the process. Still remember the stick figures you drew on the corners of a notepad and how flipping the pages really fast would 'create' a cartoon. Eons ago...but pumpkins remember!

I'm not sure how my two kids ever discovered it but one day a couple years back they would disappear into their rooms for a couple hours and come back with some 30 second stop motion clip of some scene they had created. It was a blissful couple weeks as they spent every waking moment making those clips for hours at a time in their rooms. I wish that hadn't fallen to the wayside.

I should add, they didn't even use a camera. They used some app on their Kindle to make the stop motion videos.

@Trees - oh yes I remember the stick figures.... the easiest form of animation :-)

@Ed - creativity at its best. Imagine the planning they had every night before going to sleep. From what you say it looks like they were using some app which broke up a normal video to make it look like stop motion (I am guessing)

Wow -- this is really fun and nicely done, too! I'm impressed!

Yes Jeanie, and I enjoyed creating it.

I'm wordless, Haddock!
You're so very talented! You're great at photography, video-making, and now...Animation.

Thanks Duta. No harm in trying out everything. I found this challenging (and something to keep the brain cells active)

I liked your work very much

Thanks for the appreciation Vinayak. Enjoyed creating it.

Oh my, how gifted you are to make these things and the videos are just ever so lovely - thanks for sharing your work.

No, it was an app that took lots of pictures but automatically strung them together into a video. That is why it took them so long to create each video and they would make the comment about something not going right and not wanting to start the entire thing over because something had shifted.

@Margaret. - Thanks for the comment and appreciation. Enjoyed creating thee videos.

@Ed So then it must be the "Stop Motion App" (I don't know for how long the app has been around) Yes any mistakes in between means reshooting the whole thing again.

Those are so neat!! I can see how fun it would be to come up with new ideas and then see the final work. Nice incorporation of music and sounds.

@Bijoux - Thanks Bijoux. I have lots of ideas in the head which I am planning to convert to videos. The addition of the sound effects make a lot of difference to the end product.

Oh wow. That must have taken you a lot of time. I look at videos like that and wonder at one's patience.

Yes Liz, patience is the prime factor in this, but then if you enjoy doing it, then spending a long time on it is immaterial.

This is really fun, wifey is a good unicorn maker so that video is my favourite and its little swishy tail was a great focus for your video.

Oh i am showing as anon ref unicorn comment!.. betty the wood fairy

Wow, these are great! And what fun, too.

@Betty the wood fairy : I know blogspot is acting up now a days. Even I can't reply to others in my blog !! Yes the tail swishing is what many liked.

@Martha : It was fun creating it too. Hope to create some more similar to this.

Thanks Hootin Anni. Hope to make more like this.

This is really wonderful!! - Nikhil Tyle

@Nikhil Tyle : Thanks for the appreciation.


@Milind: Glad you liked it. As mentioned by you, it is always good to diversify and explore all facets of photography. Sure will have a look a your 3D video.

So nice to meet you - your stop motion is amazing! Thanks so much for visiting and commenting on my blog. :)

Wow! This is so nice! Actually I haven't heard of stop motion technology. Really interesting!

@ Sheila : Most welcome. Glad you liked it.

@ Pradeep : Glad you liked it. Even thoughI had seen this earlier, I never thought of trying it myself.

I used to love making stop motion videos a few years ago, for some reason I stopped making them. Thanks for reminding me to get back to it.

@Pooja : It is fun and challenging. You should take it up again as more apps are available nowadays.

I love your blog also. Let’s connect. I followed you, hope you’ll follow me back :)

When the imagination works is extraordinary, I really like those creative videos.
Best regards.

@ Hilary : Glad you liked it. It is time consuming , no doubt but I enjoyed creating it.

@Julie : It is a fun project. Had a look at your Instagram and liked some of your entries there.

@Jose : You are right Jose, there is no limit to the stretch of imagination.