You can dance in any style as long as it blends with the beat and the music. 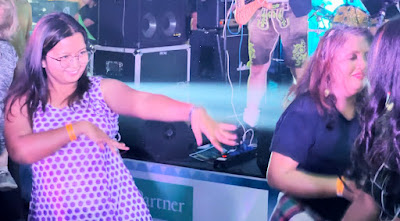 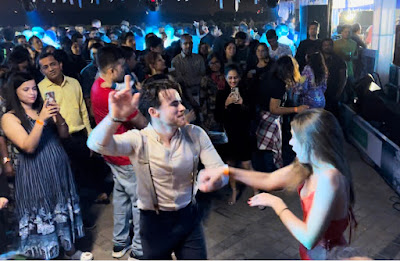 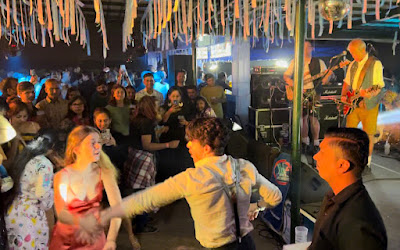 I am talking of the Oktoberfest held in Pune this year and the live band. 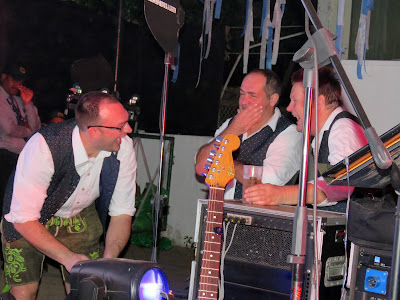 The one on the keyboard was versatile and at times I spied him with an accordian. 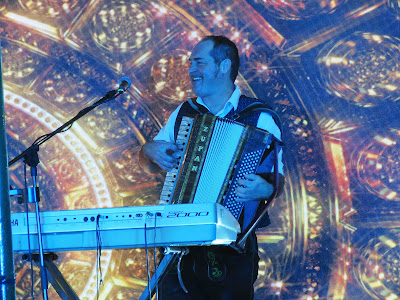 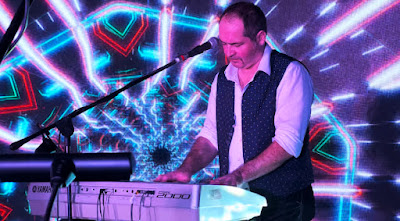 Many turned up in the German traditional outfit and were willing to pose for pictures. 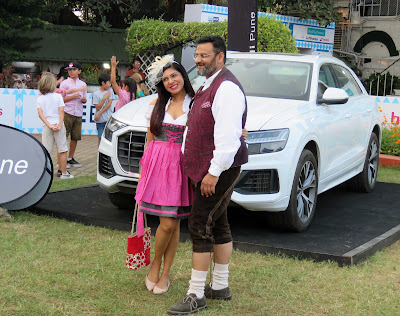 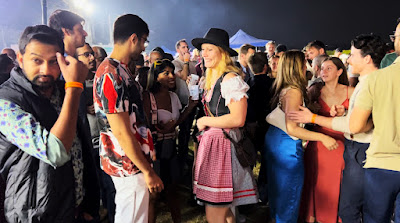 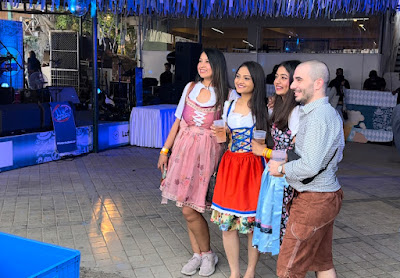 There were photographers galore and the bigger the camera the more willing the people are ready to be clicked. 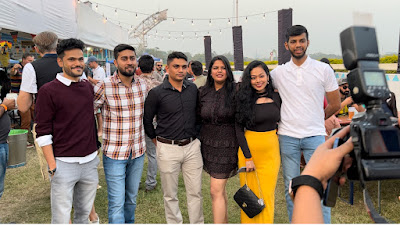 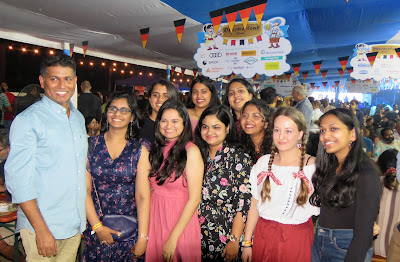 As for these beer spouts, I wonder if they are real pressure gauges. 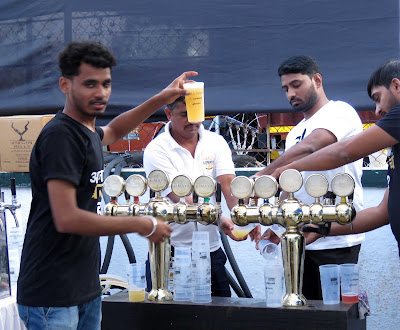 First time I got to see a portable Beer dispenser. Away from the madding crowd quietly dispensing the Beer. 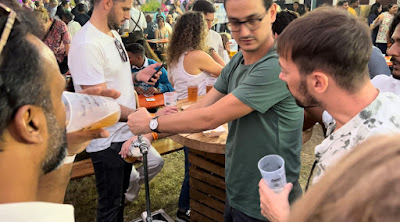 I liked the innovative T-shirt of a Beer stall by using the local language (Marathi) Loosely translated it means,"How about having a round of drinks today" 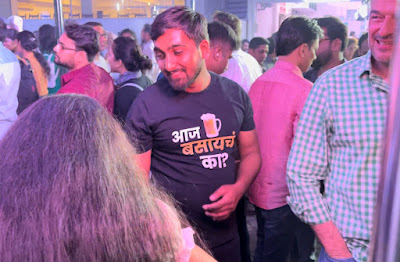 These transparent glasses are a good way of advertisement. Keep staring at the names till the beer is over. 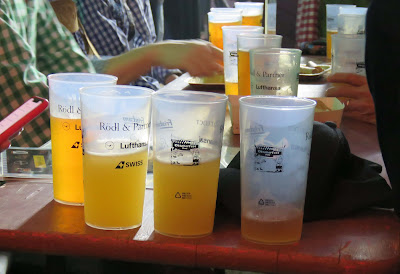 Meanwhile there were frequent sorties to the beer bar for a refill. 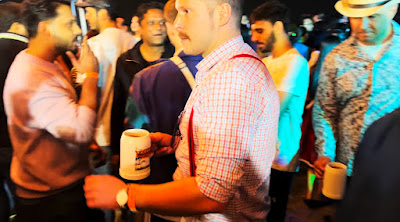 Some even had long banners unfurled to catch the eyeballs 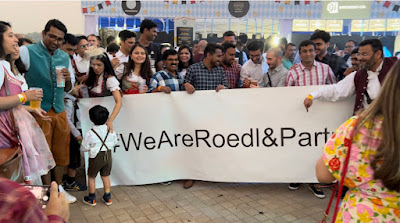 Saw this couple enjoying the music and they were light on their feet, so I dedicated a video totally on them (and sent them the video link) Don't miss the expression on that child's face at the bottom corner 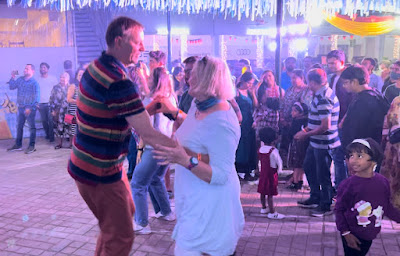 In fact I captured many in action and made three small videos. Video 1 Video 2 Video 3 There is some more footage of the band and if time permits, I will upload them too. If you see most of the pictures above in fancy colours, it is because of the psychedelic lights that were used at the venue (and a nightmare for photographers) I mean just compare the two pictures below. It is the same singer Gisele in both the cases but see the difference the lighting makes. 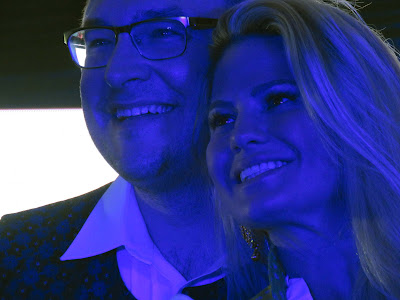 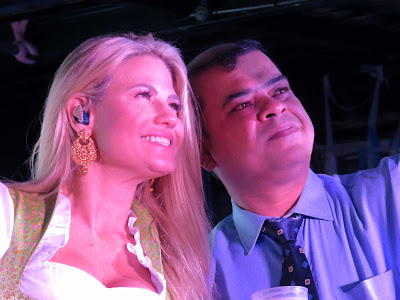 Germans are good at celebrating! Drinking beer and dancing are the main activities during these celebrations, and you've captured them very nicely!
I've much enjoyed your video with the young singer, and the other with the dancing of the middle-aged couple.

My son spent a summer working in Munich and enjoyed all the outdoor beer gardens and Hofbrauhaus, but he was sorry to miss Octoberfest. The one in Pune looks like fun.

Debra She Who Seeks said...

There's nothing like a good Oktoberfest! Beer! Dancing! Ompahpah bands!

Were these pictures recent? Our Octoberfest celebrations here are normally held more than a month ago towards the first week of October.

Yes Ed, it was held on 12th of November (a bit late for Oktoberfest) Maybe for availability of venue or other issues.

Sounds like fun, but there is a big BUT!
It´s no German outfit, it´s Bavarian! ;-)
A huge difference.
Bavaria separates itself from Germany, tradition-wise (and we do, too).

Looks like a great party.
I love dancing.
Greetings Irma

Fantastic performance. A well organised celebration. A sophisticated event. The folks attending are in a class of their own. None of the local Goans to be seen. An expensive event. I am so happy that this trend is still continuing. - Johnny Marcedo.

It looks like a fun day at Oktoberfest. My daughters have also joined in at different Oktoberfest celebrations. I heard the beer is really quite good. Fun times for sure. : )

Thank you for this wonderful post, I want to use this opportunity to share about My life how I strunggled with Hiv/Aids Disease before the Lord Jesus in my life as a candle light in the darkness. You showed me the meaning of faith with your words. I know that even when I cried all day thinking about how to recover, you were not sleeping, you were dear to me. I contacted the herbal center Dr Itua, who lived in West Africa. A friend of mine here in Hamburg is also from Africa. She told me about African herbs but I was nervous. I am very afraid when it comes to Africa because I heard many terrible things about them because of my Christianity. god for direction, take a bold step and get in touch with him in the email and then move to WhatsApp, he asked me if I can come for treatment or I want a delivery, I told him I wanted to know him I buy ticket in 2 ways to Africa To meet Dr. Itua, I went there and I was speechless from the people I saw there. Patent, sick people. Itua is a god sent to the world, I told my pastor about what I am doing, Pastor Bill Scheer. We have a real battle beautifully with Spirit and Flesh. Adoration that same night. He prayed for me and asked me to lead. I spent 2 weeks and 2 days in Africa at Dr Itua Herbal Home. After the treatment, he asked me to meet his nurse for the HIV test when I did it. It was negative, I asked my friend to take me to another nearby hospital when I arrived, it was negative. I was overwhite with the result, but happy inside of me. We went with Dr. Itua, I thank him but I explain that I do not have enough to show him my appreciation, that he understands my situation, but I promise that he will testify about his good work. Thank God for my dear friend, Emma, I know I could be reading this now, I want to thank you. And many thanks to Dr. Itua Herbal Center. He gave me his calendar that I put on my wall in my house. Dr. Itua can also cure the following diseases, HIV, Herpes, Neuromuscular Diseases , Hepatitis B, Inflammatory Liver, Diabetes,Inflammatory bowel disease ,Fibromyalgia, recover your ex. You can contact him by email or drituaherbalcenter@gmail.com, ..www.drituaherbalcenter.com .. He is a good doctor, talk to him kindly. I'm sure he will also listen to you.