Osprey and young ones

Had the opportunity to observe an Osprey nest from far. In fact the nest was on a man made platform out in the sea. While watching and capturing them on camera, I observed a few things, like the head bobbing before they made a dive for the fish. 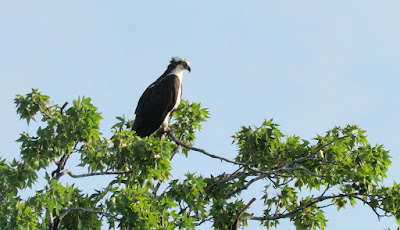 These head bobs are done to triangulate their prey. Very rarely do they miss the prey. After catching a fish they don't straight away take it to the nest. They fly around for some time to ensure that the fish is dead (or half dead) Most of the time, the adult eats a part of the fish before dropping them in the nest. (they too require nourishment) 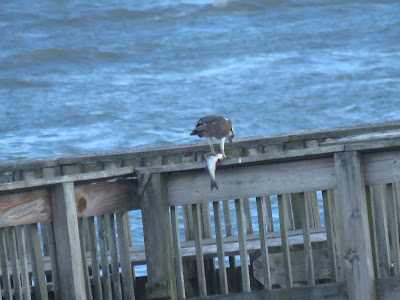 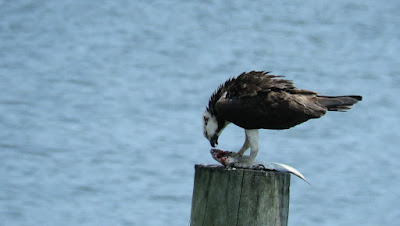 After a fish is caught, it arranges its feet to turn the fish so it faces head first. This reduces aerodynamic drag making the fish easier to carry. 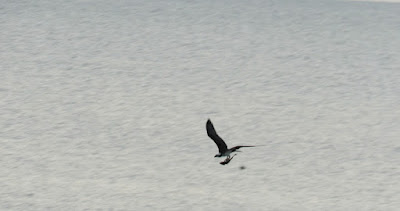 Once I noticed the male breaking off a branch from a nearby tree and placing it in the nest. Does this amount to "periodic maintenance of the house"? 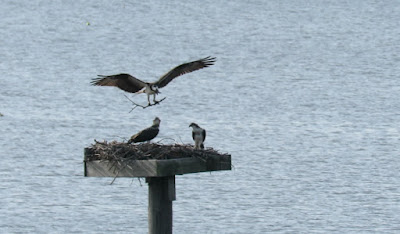 The rate of growth of the young one is pretty fast after a month as can be seen in this illustration. (courtesy) The body size is almost the same as an adult. 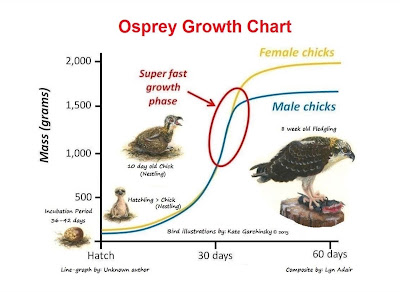 Here you can see an Adult and juvenile Osprey. 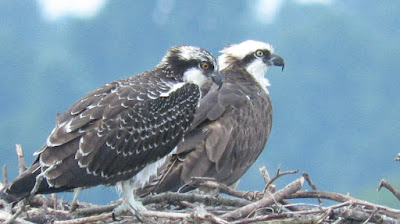 Before they fly out, the young ones try flapping the wings in the nest to get the hang of it. 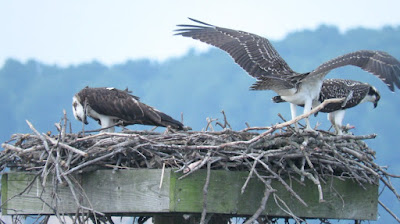 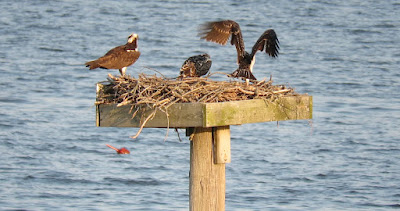 Once they are sure about it, they fly off to nearby structures to practice perching, like this weather wane 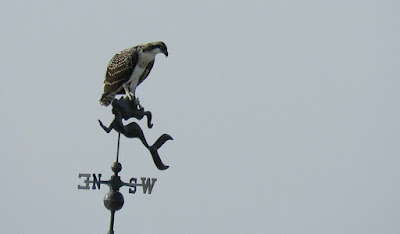 Or to a nearby tree to sit next to the parent. 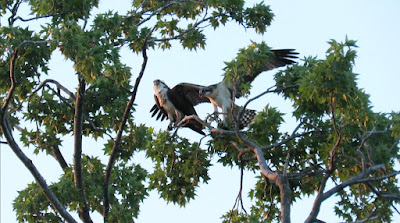 Often smaller bird species like starlings or house sparrows live in the underside of the nest (basement apartment can be seen at 5:40 in the video) 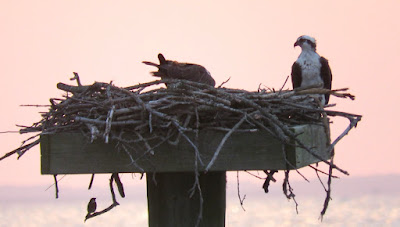 Eagles and Blue Herons are the enemies of the young ones. They try to snatch away the young ones when adults are not around. I saw a Blue Heron being chased away who tried to get too close to the nest. 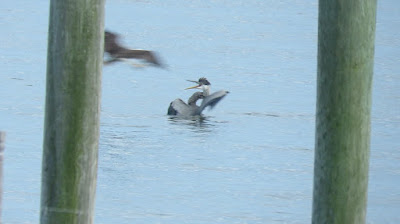 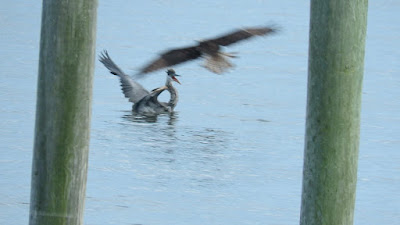 I captured some of their movements over a period of eight days and compiled it to a five minute video.

The whole episode was captured at Chesapeake Bay near the boardwalk, (which was described in the previous blog.)  Lately blogspot does not allow replies to be sent to individual comments (or is it that something is wrong with my settings)

just off to watch the video but before I do wanted to make sure I don't forget to comment! how interesting that a bird through evolution has developed the best aerodynamic way to carry its prey - nature is underestimated, intelligence shouldn't only be valued/assessed by human intellect! I would have watched those birds for hours - thanks for sharing :)

Many birds do that head bob thing. It's amazing to watch them catch a fish.

Extremely interesting video! Thanks for sharing.

Hi this article about birds is very interesting and informative

Very interesting to read, birds are wonderful to watch and observe. The video is good too.

Yes, it has to do with a setting called "cross sight tracking" in your browser. It has been going on for quite awhile. Here is a post I wrote about it awhile back.

I have never been someplace where I could really sit and study an animal over a period of days. You might be the Jane Goodall or Diane Fossey of osprey!

These are amazing captures! Wonderful photos.

what a wonderful video. I have seen them fly with a fish that big and am amazed how they do it. thanks for visiting my post today

I love osprey! Your journal of the days observing is fabulous. You visited with me at Hootin' Annie's, butI am also an avid birder and have a 2nd blog with nothing but my birding photography and I invite you to come by on Saturday (at noon,Texas time) and share this blog post link with us!!

The Osprey images are superb. They are quite the hunters with the vision. The habitats are all included in your details post here. Fantastic blog!

How interesting all that you tell about the osprey, its preparation before hunting the fish and the way to take them to the nest. You had a lot of patience watching it and the photos are beautiful.
I liked them a lot. Congratulations!
Greetings from Spain :)

You are so lucky to see these beauties up close! I've seen osprey nests but never up close. They are amazing birds. I'm surprised they don't get as much attention as eagles.

It is amazing to see the behavior of birds, of animals, for those of us who like it is simply wonderful.
Thanks for sharing.
Best regards.