Good to see that artists have no qualms of sitting anywhere when they want to capture something interesting. 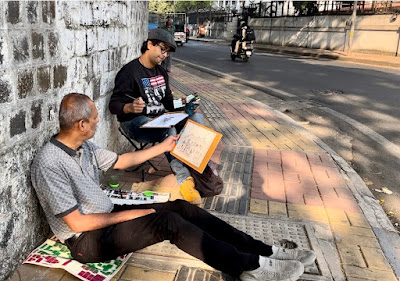 I am talking about the Pune Urban Sketchers who had a session at the Pune General Post Office. 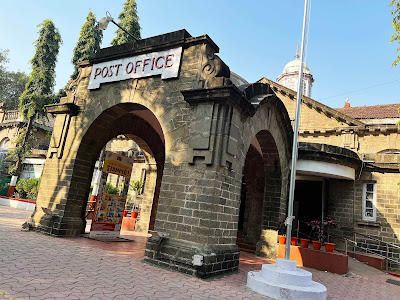 This artist (Harshad) sat outside the premises but the red gate gave a good contrast to what he wanted to capture. 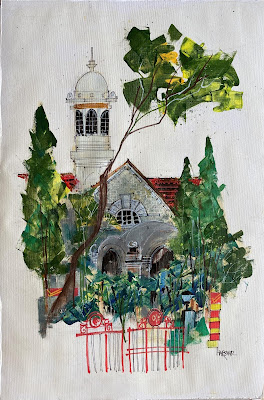 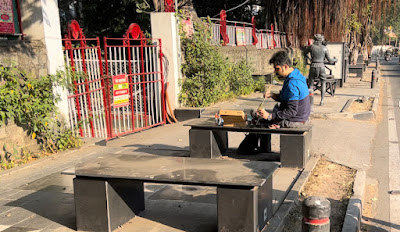 This is one of those old letter boxes from the British era which can be seen in front of almost all GPOs in India. I remember there was a board next to it saying that all letters posted in this box will have a "special cancellation stamp" on it. Wonder why they removed that sign. 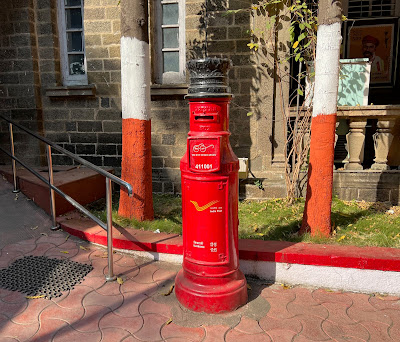 Walking around the Post Office brought back memories, like this philatelic bureau from where I used to buy first day covers about five decades ago. (at that time it was situated on the left side of the entrance) 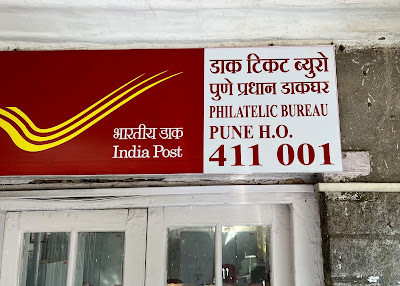 And these segregated boxes for Airmail / Local and rest of India. There was a time when the letters were delivered on the same day (if it was local) provided you post before the first collection at 7.30 am. The age-old method of making gum by the Post Office as a "public service" is still being carried on. 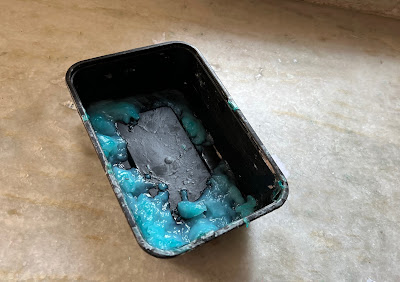 At the rear of the post office I noticed this wrought iron spiral staircase which still stands, but not in use. 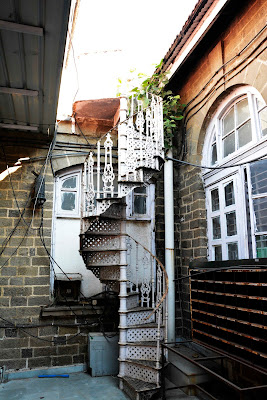 Deepali has captured this well with her minimalistic but effective drawing. 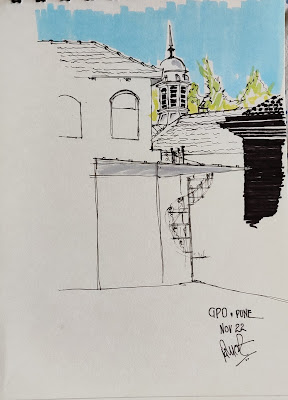 Even though it was a Sunday, the sorting activity was in full swing and somebody did sketch them in action. 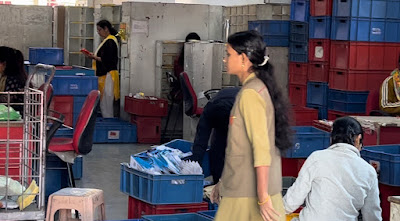 Sitting in the sunlight and creating a picture has its own advantages. (creativity while soaking in vitamin D) 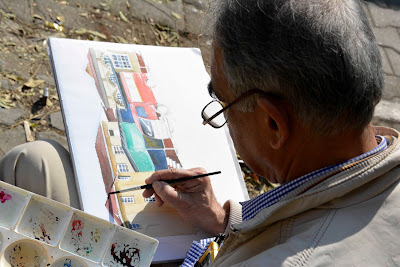 One young man decided to capture the steeple of the 160 year old St Paul's church which was just across the road. 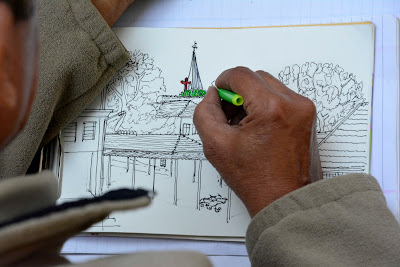 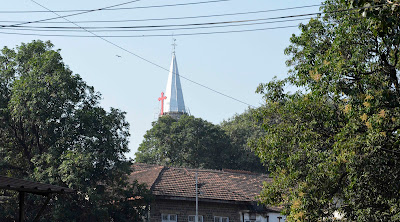 Participants were from all age groups and that is one way to discover the hidden talent in the young ones. 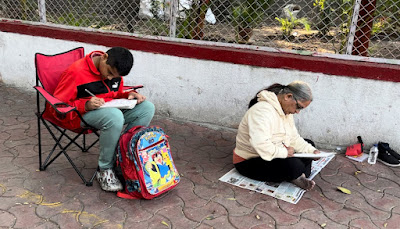 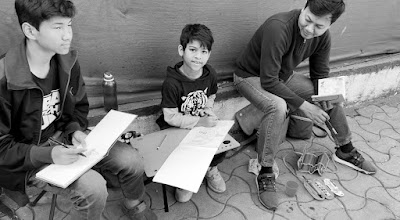 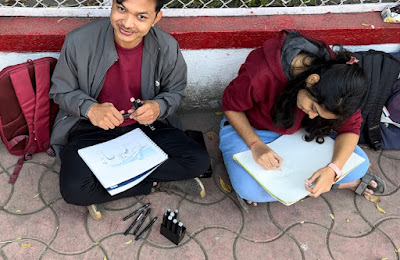 I like the improvisation done on this tripod whereby a board is attached to hold all the required material while painting, including a  packet of biscuit :-) 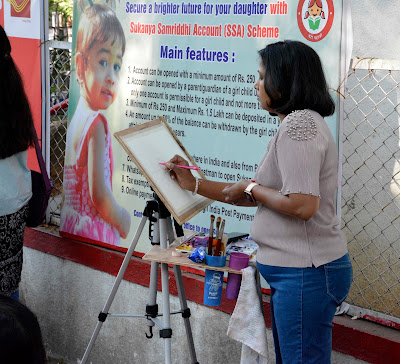 I was also fascinated by the medium of creating a picture. It may be a variety of colours with the modern pen or it may be charcoal. 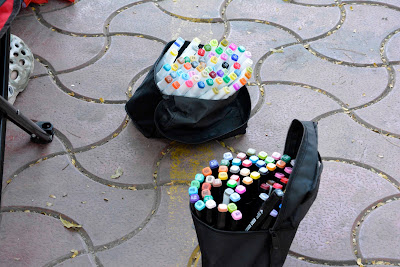 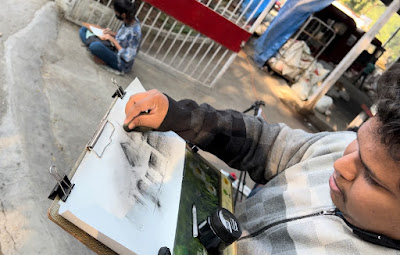 Many in Pune are not aware of the existence of the Zero stone which is dug right in front of the GPO. (Pune was earlier called Poona) 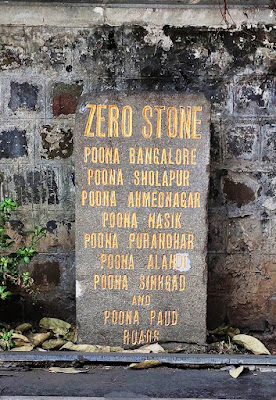 The mandatory group photo at the end of the session. I was not very happy with this group photo as some of them were in the shade and some were directly under the sunlight (which is against the "rules" of clicking a group photo) But then I did not try to rearrange them as I knew this was a group who would be happy in creating a picture than being "in the picture" Good to see all of them smiling. 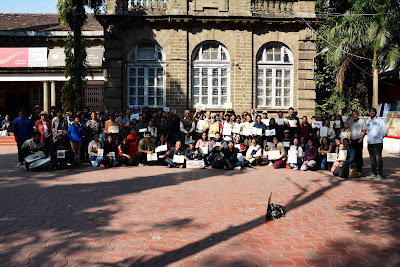 Captured most of them in action and compiled it into a 12 minute video. All this activity reminded me of the Urban Sketchers I captured four years ago at the Botanical Survey of India. Something big is coming up for the Urban Sketchers in the first week of December. These three slides below will give you a better idea of the event. 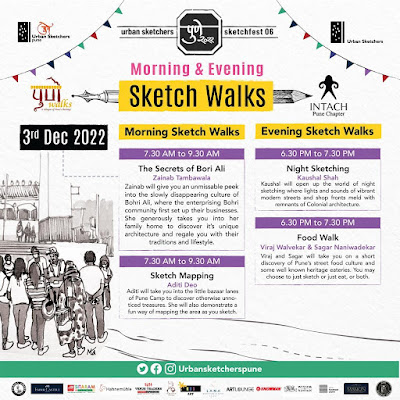 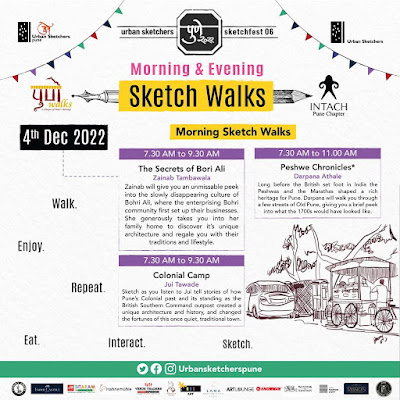 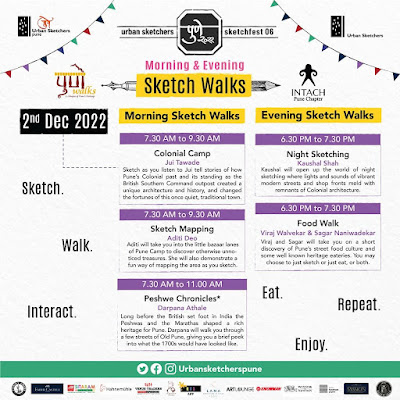 Beautiful photos and writing ! Thanks for mentioning my name !

How lovely! Thank you for covering us. You're absolutely right about that last group picture... It's just a custom and most of us can't see our own faces but I'm guessing somebody has a record of 343 of them, and it's actually just the sketches and comaraderie that counts.

Hi Joe, an excellent coverage of our weekly event.Your Description with every photograph is quite interesting. When you complained about gr.photo, I complain about 'Sketch -Display'.We miss extraordinary work lost in average sketches and don't get viewing pleasure.-Ashok Panwalkar

Been to Pune/ Poona so many times and around but never saw Zero stone. Thanks for the discovery.

They probably choose a view with care, and then they stick with it. I could probably do this more and better with photography.

Sketching is something I love to do but rarely do. I'm not sure why that is but I need to correct that.

Had been in that area many times but never consiously saw the Zero Stone, would look for it next time

Lovely memories of GPO Poona. I used to go cycling to my college through GPO.
Hi, Joe how is ur health. Hope healthy and fit.

How fun. And what a great subject to capture.

Wonderful photos and I always enjoy seeing an artist at work.

Great photography Joey. It is heartening to see so many artists, young and old, and quite talented too. - Deepak Purandare

Good information.
I have shown photos to my grandsons and also told them the importance of post office for deciding distance between two cities.
Also they were surprised to see nice painting on the road.
Thanks
R P Madiwale.

I have always thought it was such a talent when one could draw or paint. I have never had this talent myself. I can see why the artist wanted to capture the red gate. That is something that a photographer would want to take a picture of as well. Your Post Office is different than ours here. I like those red cabinets.

I have been in Pune for the last 50 years, but have not seen this. Thanks - Madan Sharma

Wow.... what a great blog on Urban sketchers. I specially am amazed at the different age groups of people enjoying art. - AnnMary.

Great photos and what fun!

Such a fascinating post!
I enjoyed seeing the artists at work!

the old post box - such a relic now :D

you have captured the enthusiasm and creativity of the sketchers so well. truly a day well spent i am sure

It must have been so lovely to be in such a setting!

This is such an interesting concept!
It is also nice that artists are still keen on sitting anywhere and practise their craft

There are some very talented artists there, and it looks like a great morning for everyone! It's interesting seeing how different your post offices are to those in Australia!

Hope you had a wonderful Christmas and you have a happy new year!