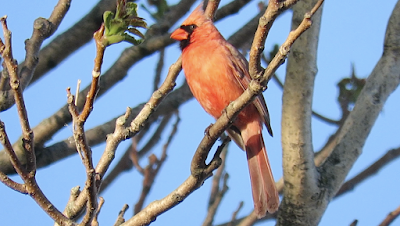 I just managed to click one shot and he flew away. 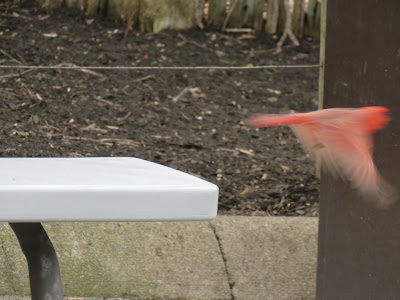 On the third day when it was time for us to leave Ohio, one of them made a special appearance for me and was even ready to sing for me. I quickly managed to capture her performance with a hand held camera (so you will have to excuse the slight shake in the video) 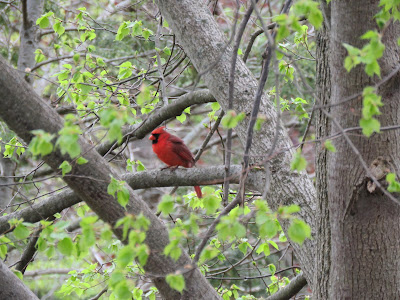 It is said that both the male and the female sings together while nesting.Northern Cardinals live for about 13 to15 years which is pretty impressive for a bird. They are the state bird of seven states. Illinois, Kentucky, Indiana, Ohio, Virginia, North Virginia and North Carolina. The airbnb that we stayed in,  was located in an Italian  community, and it was a peaceful place. 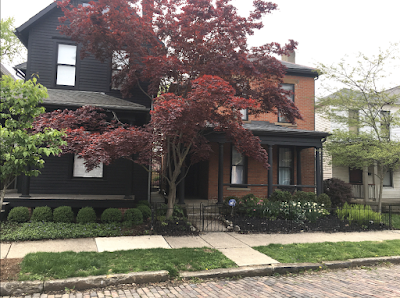 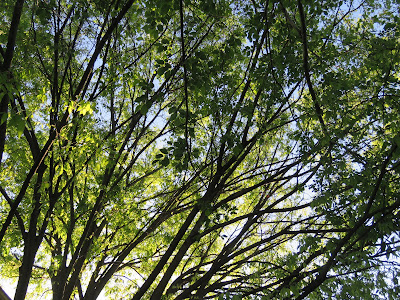 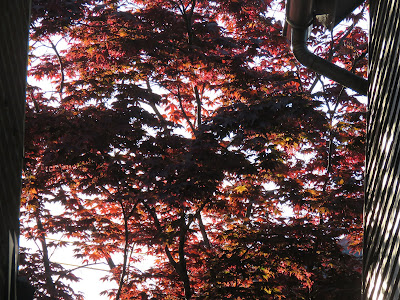 It was good to see early morning joggers passing by waving out with a smile. 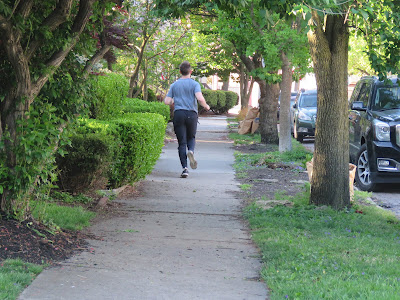 I even spotted a vintage car parked in front of a house. 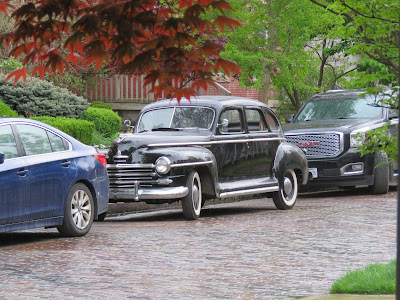 There is a Roman Catholic church (St John the Baptist) within walking distance and we could attend the Sunday morning service at this church. 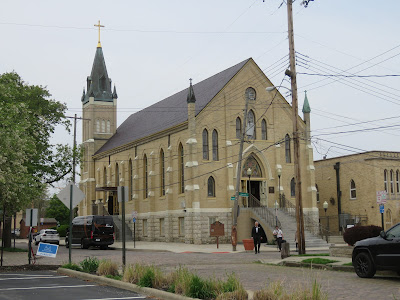 It is said that this church is more than a century old and functioned  as a hub for the Italian speaking community who migrated here. A sketch of the church when it was built in 1898 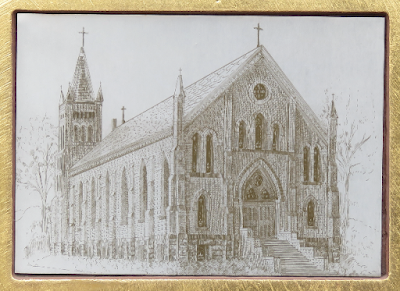 The previous day when I passed by the church, a wedding just got over and the photo session was in progress. 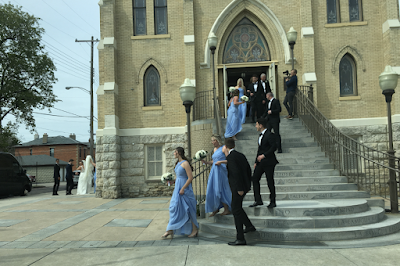 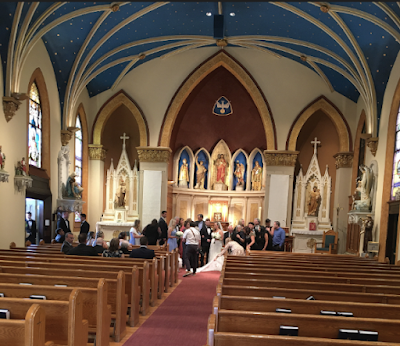 On Sunday evening we went to the topiary park. The topiary figures are several varieties of Taxus, commonly known as yews. 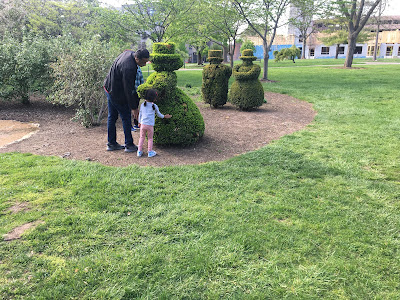 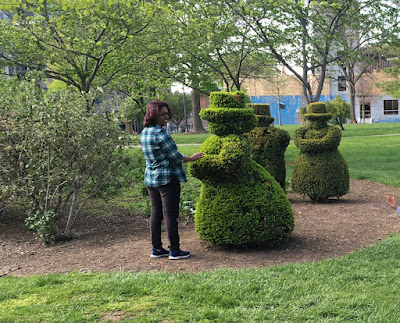 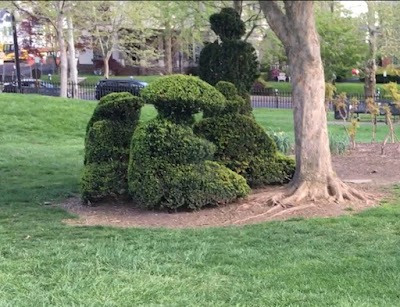 The figures are trimmed and tied each June after their main flush of growth. 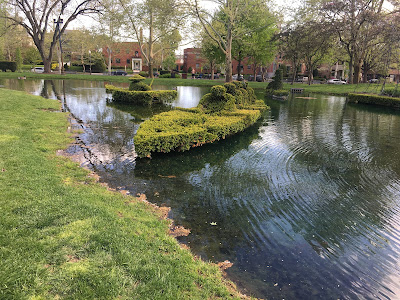 They are also trimmed through the summer to maintain their appearance. The beautiful gardens filled with perennials and annuals are planted and maintained by volunteers of the Friends of the topiary park.  If you are near the Convention Center, don't miss the bronze sculpture of Arnold Schwarzenegger. 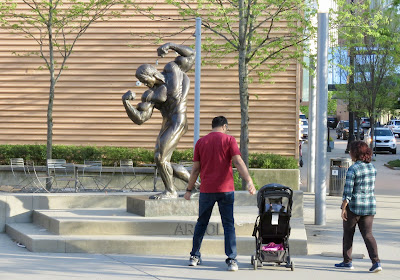 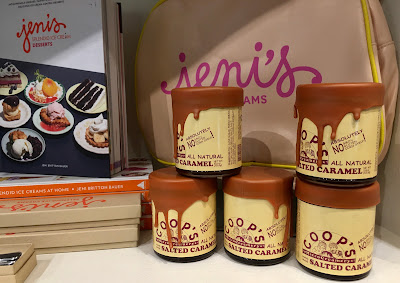 Had to wait in line for about 15 minutes but it was worth the wait. 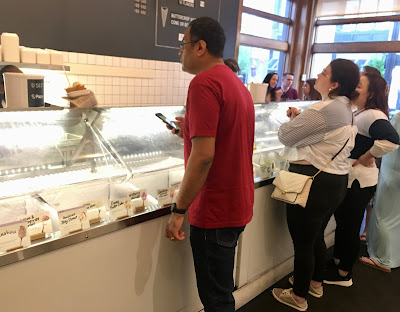 The cones are hot and crisp, maybe because it is made right there in front of you. 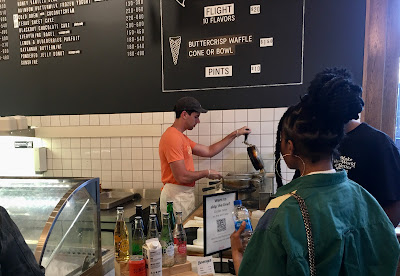 Great pictures. As usual :) The topiary park is amazing.

Nothing exotic this time, at least for me. I see cardinals quite often. Hope you enjoyed your stay in America.

Thanks for sharing Joe. The cardinal and the Indian Bulbul seem to share similar feature except for the colour.

We don't see cardinals around here. That would have been a treat for me, too.

My favourite is the topiary!

Thanks a ton Joe ! Lovely pictures. Hand held camera or not, that is a beautiful video. And such clear sound wow! Thanks and have fun - Viji Didi

Thanks for stopping by my blog! We have a lot of interests in common. I love the older country music, and have read some of the same books as you. I don't get many comments from people outside the United States, so it's a treat to find a kindred spirt.

We gave cardinals year round here in Louisiana. I am always reminded of loved ones lost when I see one. They are beautiful.
Blessings!

That's a beautiful virtual tour of Ohio :). The cardinal bird looks and sounds beautiful. Thanks for dropping by my blog. Great pics

that's a nice tour for those of us who haven't had the benefit of visiting Ohio, birds are something often overlooked so I enjoyed this post!

How wonderful, thanks Joe, travelling again, lucky you. - Carol Heydon

Excellent snapshot of Columbus Ohio and your experience :)

Wow what a beautiful post. I would love to get a cone with you. Have a lovely day.

Happy to go through your blog. Enjoyed the tweeting sound of the red cardinal.
You are enjoying life and all the clicks are beautiful. - Vilas Bhalerao

Read your blog Joe.
You write so beautifully. Loved the way you have explained the beauty in words.
You are enjoying life and the clicks are beautiful. - Sneha Srivastav

Cardinals are such beautiful birds. My parents loved to watch and feed the birds especially the cardinals. Now it's my turn. I can hear them in the woods behind my house. After my parents passed away, if I was feeling down, a cardinal would come to the feeder. When I see the cardinals, they make me think of my parents.

The topiary figures are amazing.

What a fantastic trip! Thanks so much for letting us tag along. I love the second picture of the cardinal so much, looks like a painting. And the vintages car is so cool.

The topiary sculptures are absolutely beautiful. thanks for stopping by and leaving a comment. Have a wonderful day.

Thanks for taking us through your trip of Ohio. :)

HMM... the cardinals are of 2 different colours. The first is a salmon pink and the second the brilliant scarlet red typical of cardinals. Both are beautiful. The tree with red foilage is a maple tree? its branches overshading the house makes a good shade. I like your pix of the red foilage and its dark shadows. I tried to do topiary on my bushes, it was a scary disaster. Best to leave that to the experts

Hello,
Pretty captures of the Cardinal. The ice cream and salted caramel sound yummy. The topiary is amazing, I would like to see this park. Great photos.

Take care, have a great day and week ahead!

Cardinals would be a treat for us to see in our corner of the world.

Great photos! Especially the cardinal. I see them so rarely, and it's been years since I've spotted one. They're so pretty!

Dearest Joe,
Glad you got to visit Columbus, OH during the spring.
Your Cardinal video is lovely, was your 58th viewer.
We have several here in our garden as well and always a joy to watch.
That red maple tree in front of the airbnb was stunning.
And St. John the Baptist Roman Catholic Church sure looks impressive. We had a small one here and now a modern new building; not comparable with such lovely architecture.
Hugs,
Mariette

The cardinal is really a beautiful bird, I've never seen one in the original, but now I know what its song sounds like. I had to laugh when I saw the statue of Arnold Schwarzenegger (Arnie is originally a compatriot of mine; I didn't know there was a statue of him in Ohio :-DD)
All the best from Austria
Traude

Incredible Photos - Keep On Keeping On

Such a vibrant little birdie

It was fun for me to read about your visit to our state capital and also see a beautiful cardinal for the first time! Did you visit the Jeni’s in the Short North? I thought I recognized the interior. What flavor did you try?