The movement of the brown capped pygmy woodpecker was interesting to watch, especially the way it pecked off the outer bark of the tree to inspect if any insects were hiding in the crevice. (can be seen in the video) Don't miss the matching pattern of its wings and that on the tree. 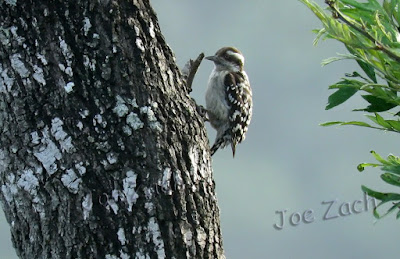 Had been to the Nilgiris (Tamil Nadu) last month. A beautiful place as far as nature and wildlife is considered. 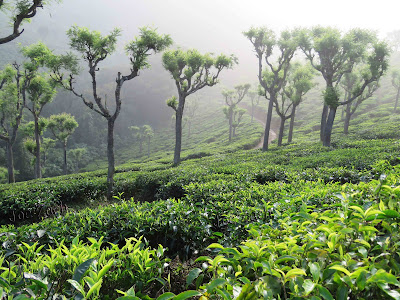 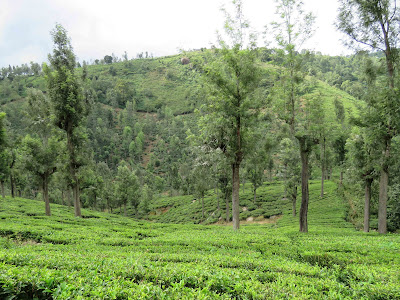 Bison (Indian Gaur) roam the hilly slopes and are generally calm unless provoked. 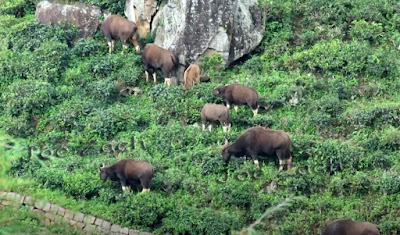 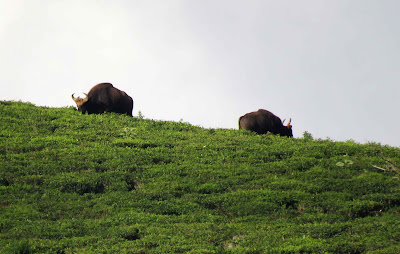 Heard that there were wild bears where we stayed and I was lucky enough to get some footage of him lumbering up in the hills. 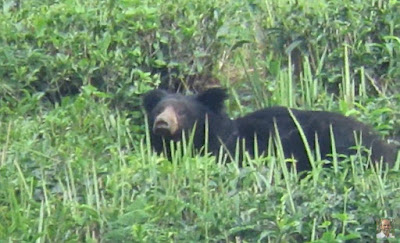 Sighted a Hoopoe. While reading about it, I came across interesting stories including the fact that Hoopes were thought of as thieves in much of Europe and harbingers of war in Scandinavia 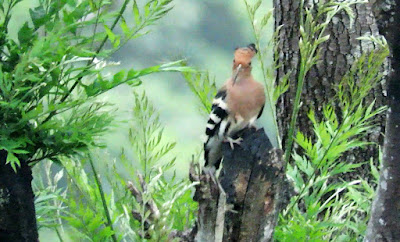 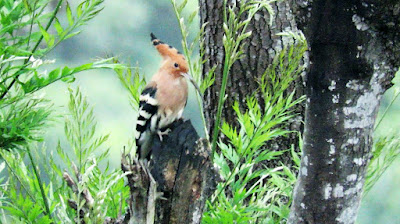 It is nice to see different species of birds basking in the morning sunlight. Be it the tickell's blue flycatcher, or the pied bushchat or any other bird. 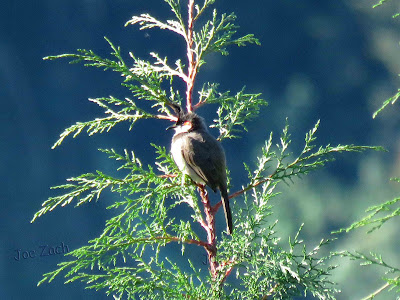 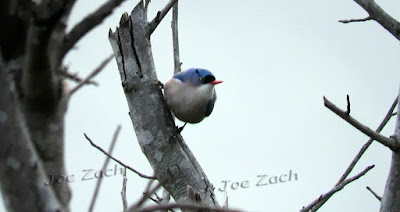 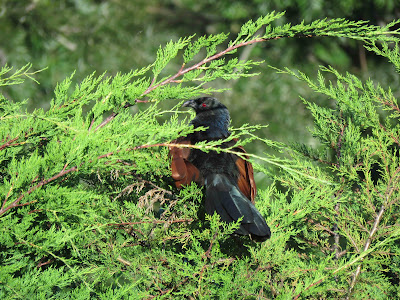 I was even happy to see the common sparrow, which is now not so common in the cities. 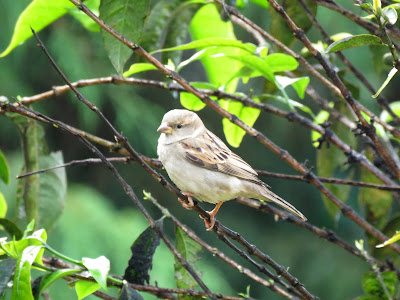 From far, this looked like one of those vintage porcelain insulators used on telephone lines, but when I zoomed in with my camera I realised that it was a long tailed Shrike 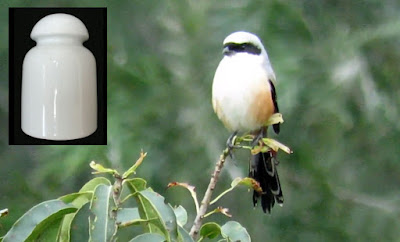 The black winged Kite was looking majestic sitting at the top, but what is spectacular about it is the way it hovers in mid air over open grasslands, probably looking for a prey. Managed to capture that action in video (though there was a slight camera shake considering the fact that the camera was hand held) 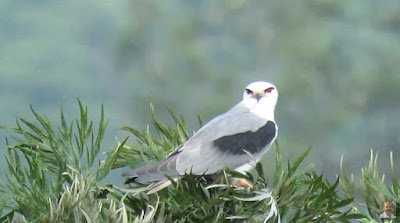 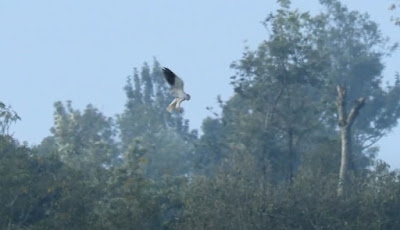 Sighted many more birds but the giant squirrel was a first for me. Its huge coffee coloured bushy tail is very mesmerizing. 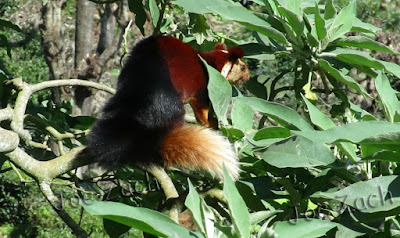 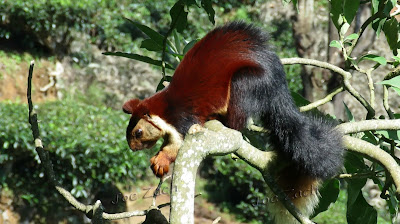 I found that it was sort of friendly and didn't mind me taking photos while it went about the business of eating the fruit from the tree.

I Heard that they did sight elephants too passing by (twice in the last three years) The vegetation too adds to the attraction for the animals like this bunch of bananas which I clicked in the valley. 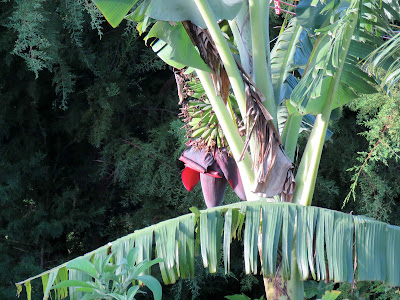 Talking of vegetation, I saw this tamarillo for the first time. They say its a type of tomato . Prior to 1967, the fruit was known as the "tree tomato" but the new name tamarillo (which was not the name in Spanish or any other language) was chosen by the New Zealand Tree Tomato Promotions Council in order to distinguish it from the ordinary garden tomato and increase its exotic appeal. 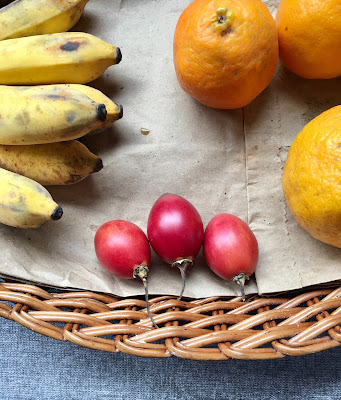 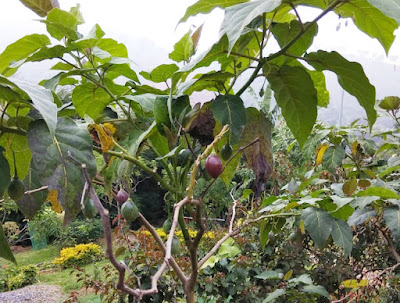 Fabulous photography. When you see a bird or animal in its natural surroundings, it is usually at a distance. When you see it up close in photographs with every detail so clear, you really appreciate the beauty and magnificence of these creatures.

Really enjoyed your photography/video - especially the bear, how wonderful to see him in a natural environment going about his business, free and content. Happy New Year to you :)

Enjoyed this wonderful post and photos of so many beautiful birds and animals. Thanks for sharing.
Happy New Year!

Your photography is amazing. The nature there is truly beautiful. Great captures! I love Hoopoe. They are beautiful birds. I didn't know they were considered thieves in Europe.

Hi Joe,
Happy New Year, hope you and family are well.
Loved the pictures and the video at the end - good to see you are still out and about enjoying nature (planet earth's best gift to humans!).
Stay safe in 2022.
Best wishes, Peter and Josephine Wakefield.

Fun to see the birds and animals that we don’t have here.

You take great pictures and videos!! That giant squirrel one was the best of the lot!

You never disappoint me in bringing out nature, the variety of birds and now a wild bear too in several posts of yours. Interesting and informative! Thanks

It will be quite awhile before we see blue and green in our nature so it's fun to see your environment and these beautiful birds! And a bear too!

Always enjoy seeing all your flora and fauna pictures.

Happy New Year to you & yours. Fantastic, beautiful photos & descriptions. Thanks, hope we will meet up again.

What wonderful photos! I LOVE the giant squirrel! What a beautiful, richly coloured creature and his tail is superb!

Dear Joe,
Very nice write up and clicks of animals and birds from the Nilgiris.... Madhav Argulkar

Very nice videos
Thank you so much

Wonderful photography an I really enjoyed the videos and the lovely music, very well chosen. We have lots of squirrels here, but no giant ones, fascinating! All the best, Valerie

Exotic birds :) I follow several bird photography folks on FB and Twitter, and every time I see something spectacular it's from India or Australia lol Beautiful photos! I enjoyed your videos.

Wonderful photography. So much beautiful wildlife. That bear would concern me a little!

You saw many interesting things of nature. I heard that there are not that many Bison left in the world. It must have surprised you to see a BEAR in the wilderness! That's a pretty picture of the Woodpecker also. Your post makes me want to spend some time in nature.

These are great pictures! I especially like the giant squirrel.

Thank you for your comment on my blog today; I like your photos of birds, animals and landscape. I can't imagine how you take such clear photos. Nice to meet you.Hello from far away California.

Thanks for your visit to my blog. Great photos!

Hi Haddock. I came by to return the blog visit and thank you for taking the time to leave a comment on mine.

Such interesting photographs! I love that you share them because these are things I will never have the joy of seeing in real life. Photography is a lovely way to share and learn.

What an amazing place, the photos are fantastic. I especially loved the Giant Squirrel photos.
Thanks for your visit, I'm already following you.

So much lovely wildlife you got to encounter! The squirrel was my favorite though. It has such beautiful coloring. We only get brown or blacks squirrels here. Never multi-colored!

Such lovely pics, you are so lucky to live in a country with rich tropical nature and animals! I probably wouldn't stand the temps, but the nature is lavish.

Dearest Haddock,
Always good to be 'back' in the Nilgiris area!
Your 2nd photo is oh so familiar with the tea growing.
Wish you would place your info 'below' the photo instead of above.
In every published book it can be seen below...
Good that you spotted a black bear; we have them here as well.
Hugs,
Mariette

Thanks Mariette for your appreciation.
I have adopted this style of writing and linking the text to the picture.
Something different from the normal practice. 😊

I must say that was quite an exciting holiday - bears lumbering, bison and giant squirrels. The red colour of the squirrel's back is very brilliant and unusual, ours here are quite plain brown. You were lucky to spot so many birds, I think you got a pix of a coucal too.

Congrats on such a great post about wildlife! I really enjoyed it!

I am glad to see you have visited my blog :-)

Versatile points of interest. It was nice to visit India through your blog, thank you.

Wonderful images.
Had visited the Nilgiris. Lovely place.
Our India has such wonderful natural hotspots!
Have a wonderful 2022!