It is so good to see all the greens against the morning sunlight. Had been to the main market (Mandai) in Pune at the crack of dawn. 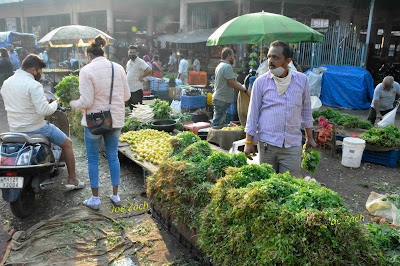 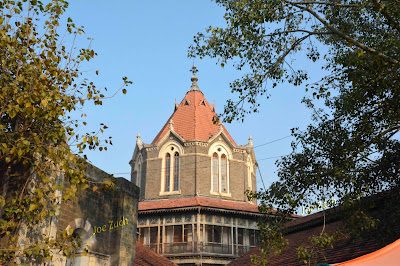 The indoor stalls were also well lit, but trying to keep the source of light out of the frame was tricky. 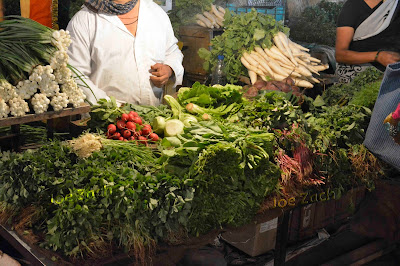 What a treat for the eyes with aubergines (brinjal) of different shapes and colours. 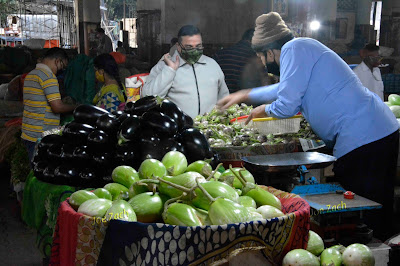 It was also a day for the members of The Urban Sketchers (Pune) to capture the place with their painting and sketching, to show the colonial impact on Pune. 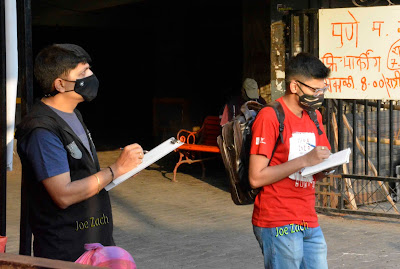 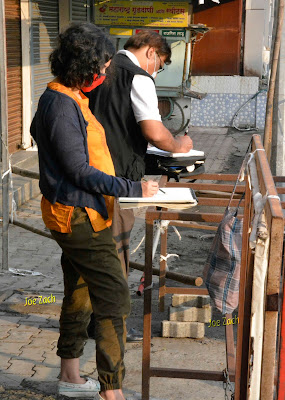 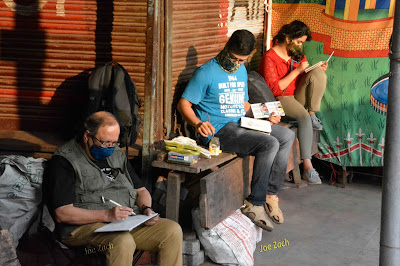 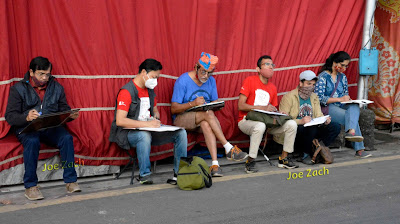 Some of them did a wonderful job of capturing the place on canvas. 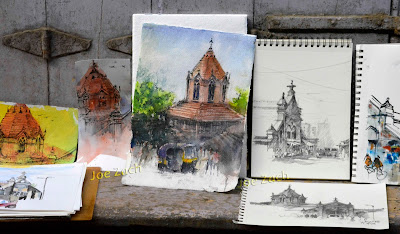 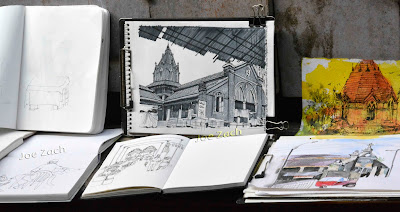 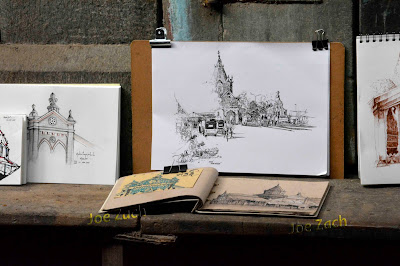 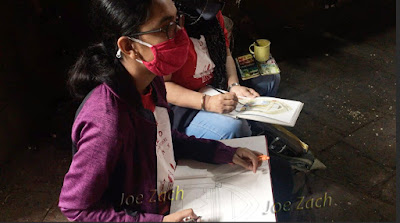 One of them was using an ipad to do his paintings. He said he has downloaded a software to do it. Mayshir (in the comment below) says it is an iPad Air and the software is SketchPro by Tayasui. 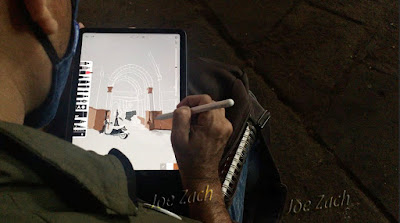 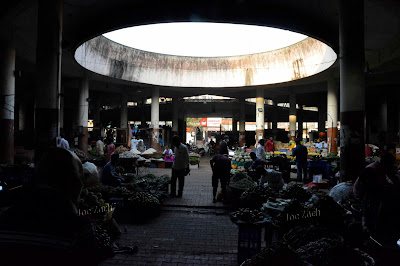 My favorite vegetables, Cauliflower and Cabbage. When ever I see them in the market, I am reminded of wifey’s instructions “Don’t buy cauliflower, there are already two in the fridge” 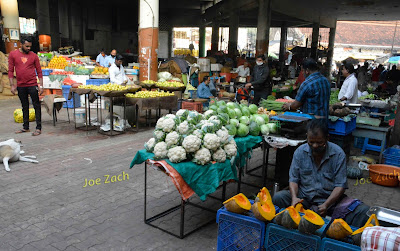 Catching up with the latest news while waiting for customers. 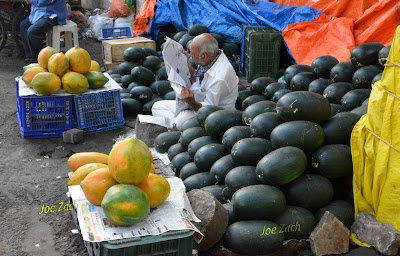 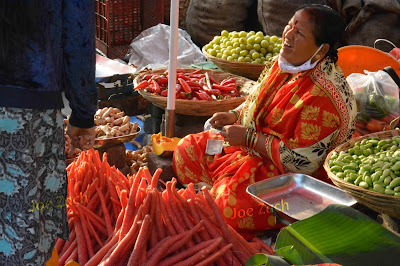 Here is a lady dip dying the earthen pots to convert them to black colour. I wonder what it is used for. - - (PS 12th Jan) Reproducing the comment given by Satish Deshpande given below : Hi Joe, nice trip to Mandai. This is harvesting season for many things. Sugarcane, green peas, plum (Bher) Gram (chana), rice...... There is a custom of offering these pots filled with all such things among married ladies, especially newly married, on the occasion of Makar Sankranti. That is where the pots are used. - Satish Deshpande 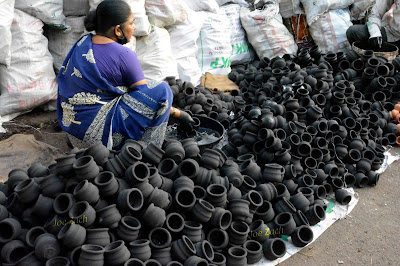 It is the orange season and most of the fruit stalls have a heap of oranges. 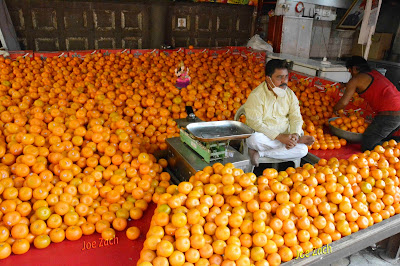 Talking of season, it is also the season of the green peas. The best time to buy fresh ones, peel them and stock in the freezer. 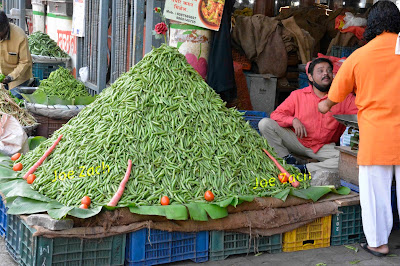 I didn’t see anyone sketching this boy with the bell. I had written about him in an earlier blog about the story of the bell. 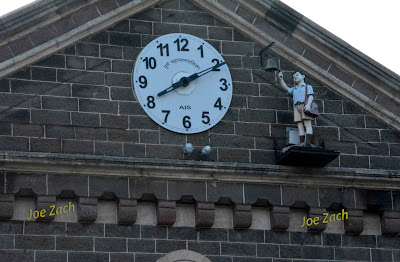 The boy’s statue was installed after the tragedy in 1993 when 38 school kids lost their lives when their bus was hit by a train at an unmanned level crossing at Phursungi. Initially the boy used to ring the bell every hour, but now it is non functional but the bell and the statue still stands. Have made a short video combining both the vegetable vendors and the Urban Sketchers in action. While clicking the pictures outside Mandai, saw a bunch of cyclists zipping past. Couldn’t resist a quick pan shot of one of them. 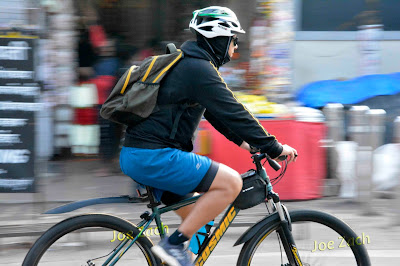 Really enjoyed this post - I watched the video - one of the artists seemed to have a computer colouring pad, any idea what it is? never seen anything like it but would love to have a go on one. I noticed also that people don't seem to bothered with distancing, in the UK we have to keep 2 metres apart but the art group were crowding together, are your rules more relaxed? Thanks for all the colour - really brightened my day - I particularly liked the lady in red with carrots and watching the man tying small bundles of green things leeks?

You could combine passion with a purpose? Well,you already had cauliflower in the fridge😜

You have captured the soul of the marketplace. By the way, I buy cabbage too. Every single time 😬

Betty, I spoke to that guy. He was using an iPad and he had a software loaded on it by which you can sketch/paint. Yes social distancing is supposed to be maintained, but at times it is not strictly followed.
The guy was making bundles of lemon grass which are used while brewing tea. It gives a special aroma and taste to the tea.

Very true Rabbit, (and waiting for the stock in the fridge to be over)

I have more colourful pics clicked yesterday but used only half of them.
Long live the cabbage tribe 😊

A trip to the famous vegetable market of Pune. I have been outside but never went in till date. Amazing photos clicked joe. Never saw the boy with the bell will see him next time I visit mandai. The artist with app caught my attention and as usual you gave a 360 degree view the market including the artists sketching and painting. Thanks for the Trip Joe. Best wishes Augustine

Yes Augustine, many have not ventured inside. You get all sorts of vegetables and fruits over there.
I remember reading about that ghastly accident in the papers.

I have been to a number of foreign countries with outdoor markets just like in Pune and found them so interesting to see. Here in my country 99.9% of the people just buy their veggies in a can, frozen bag, or a small amount of fresh that is bagged up already in plastic bags. It is just not the same as a huge mound of peas piled up on a table outdoors.

True Ed. I too would avoid all canned/ packed food if it available in this (fresh) form.
The joy of looking at all those greens lifts up one’s spirit.

Joe, reading your blogs always gives me the feeling that I was traveling with you..well done my friend.

Most welcome friend. The idea is to share my experience with all. Glad you enjoyed it.

Excellent photojournalism, and the sketchers did very well too.

Thanks Anvilcloud. Hope to do more such forrays.

Hello Joe
Just love your blog coz it's about our Pune (Poona).

Glad you are enjoying them Felix

I love markets. They are the main attraction for me wherever I go.
In addition to the fruit and veggies displayed on the stalls, my attention was caught by the black earthen pots, and by the sketches done by the urban sketchers team.
All your pictures and the video are a delight to the eyes!

Yes Duta, the market place says a lot about the town or city where it is located. I am yet to find out where the black pots are used.

I can imagine that would be a great place to sketch. Looks like a great market.

Yes Liz, the main market of Pune, started off during the British era in India

Great narrative !
Keep it up. When I read your blog, I discovered same old Mandai differently.
Regards
Abhijit Athawale

Yes Abhijit, I too am discovering finer aspects of the market every time I visit the place.

Hi Joe, nice trip to Mandai.
This is harvesting season for many things. Sugarcane, green peas, plum (Bher) Gram (chana), rice...... There is a custom of offering these pots filled with all such things among married ladies, especially newly married, on the occasion of Makar Sankranti. That is where the pots are used. - Satish Deshpande

Thanks Satish for the information. Have added it in the blog as a Post Script.

Your photos capture a wonderful slice of life with all the color and energy it brings. I'm so impressed by the quality of the art done by the urban sketchers -- quite beyond sketching to me, but really thoughtful, well done art. Beautiful photos, each and every one.

It's an iPad Air and the software is SketchPro by Tayasui

Yes Jeanie, everyday life around us is so colourful. It is left to us how to capture it. Glad you enjoyed it.

Thanks Mayshir, have added your. input in the blog.

This was a lovely post, Haddock. Full of life and colour, and apart from the masks, it looks as if life is quite normal. I love it! Some of that artwork is stunning. There's so much artistic talent in the world, isn't there?

Yes Vallypee, when I am out on the road I get the feeling that life is normal and there is no pandemic. As for the art, I am really impressed by the skill many of them possess. I wonder if I can do something like that.

What a nice post! I wish you a very happy 2021, and delighted to meet your blog, I saw your blog and I thought you would like us to follow each other. Follow me and I will follow you as soon as possible. Let me know what you think. I would love to hear from you! :) 💜💜💜

Nice photos. I like to see artists at work, too.

This is wonderfully educational (and colorful!) photo-journalism at its best, Haddock. You can be very proud of yourself.

Yes Ginnie, tried to make it as colorful as possible. But then a marketplace is always colourful.

You have so many fruit and veggies in your markets that we haven't even heard of here in Europe, cooking must be fun with all that produce!

Oh yes Dezmond, the variety is so vast that we are spoilt for choice. Every time we visit, we select a different set of vegetables, and yes we have fun cooking with them.

Lovely one Joe. Where is the Mandai? Not Shivaji Market? - Vimala Madon

Not Shivaji Market Vimala.
From Main St go to Laxmi Rd. (via Booty St)
On Laxmi Rd, after City Post turn left (It is actually visible from Laxmi Rd)
About 1.5 kms from Main Street.

Looks like a very popular market. Cabbage I like but not cauliflower. I am sure the sketchers had a great time. Lovely pics

Thanks for stopping by my blog. Yes, most of those folks can really draw. Thanks for the note.

Sure one busy market. Look at all those oranges. Wow.

I enjoyed your pictures. Thank you for sharing.

I love this post. What a variety of shapes, colors, textures, light, shadows, that you got.
Those sketchers are talented!!

Thank you so much for stopping by THS. You really have an interesting blog. I enjoyed the visit to the market and to see all the different veggies. Those pots were intriguing as were the artists.

what a great place and I loved to see the photos of all artists. A great idea for meeting and artmaking. The shared artwork is gorgeous. :)
Thanks!

You captured the essence of the place beautifully ,words and pictures , like I was there myself. Beautiful sketches too. The artists look so immersed in their art,but they don't miss anything.

Lovely documentation!
The sketchers & their sketches are so nice!
Great pics & description!
The spaceship is ready to take off? :)