Last week a Christmas Bazar was held at the church compound of St Patrick’s Cathedral (Pune)
It was fun and I also had some time to observe the place (and people) in detail.
As I was there before sunrise, I had a good opportunity to see the sun coming up, casting long shadows (a photographer’s delight) 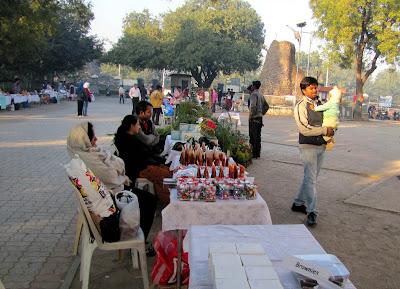 People were getting ready with the stalls, sipping in hot tea and waiting for the customers to come in. 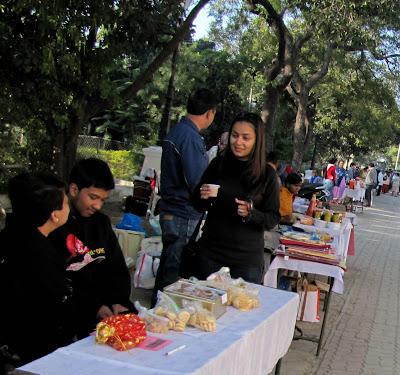 The 8 O’clock sun was a good time to click the steeple of the church. Sitting at one of the stalls I had ample time to observe the eagle sitting on one of the steeples. (or rather on the lightening conductor)  Its mate came down and both went gliding together around the steeple, and when they were tired they would rest for some time. I presume there is a nest around. Now looking at the close up of the eagle, I was wondering if the pole of the lightening conductor is designed with the forethought that a heavy bird can possibly sit on it. 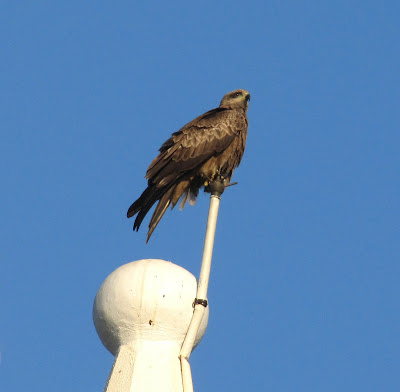 The sun caught the banana tree in the right mood. 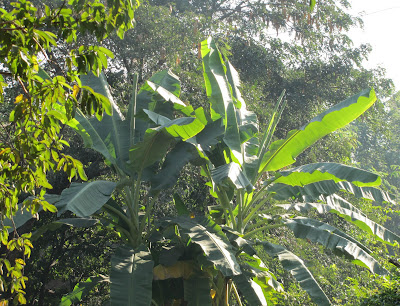 And so was the path to the Bishop’s house. 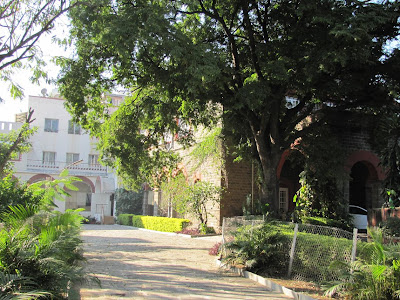 After every service, people thronged in and the deserted tables were full of activity. 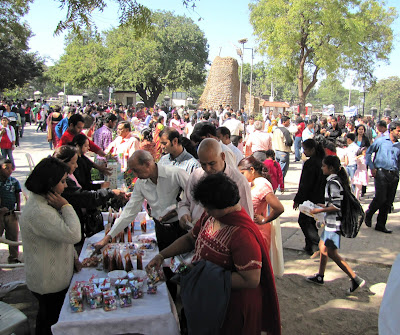 Some liked the home made pickles while others bought the young saplings that were for sale. 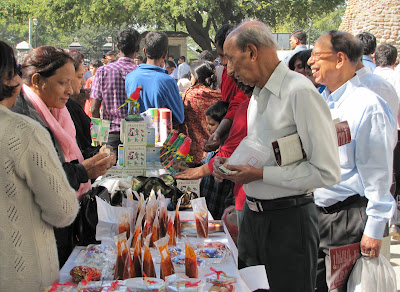 Oh yes there were eatables too and who wanted to miss the yummy and hot cutlets. Some preferred the Vindaloo over the Sorpotel. I liked the way this gentleman parked his walking stick around his neck while sipping the hot coffee. 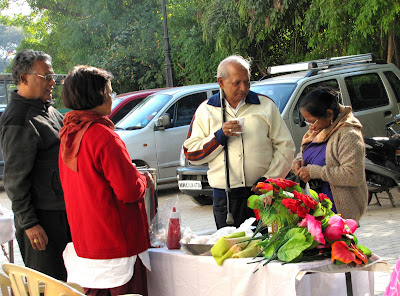 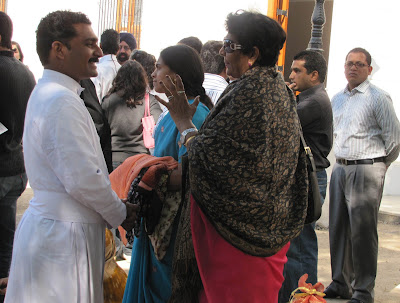 As far as the buying power is concerned, it is the kids that decide and steer the parents about what to buy. No wonder most of the ads on the television are aimed with the kids in mind. 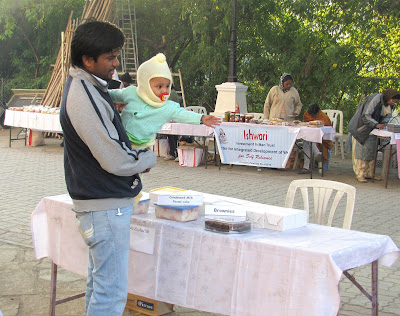 Starting from the tiny tot. This one (above) was attracted by the bright colours on the next table and kept leaning towards that (even though there were lovely brownies right under her nose) But the brownie table was not attractive and colourful for this one year old !! 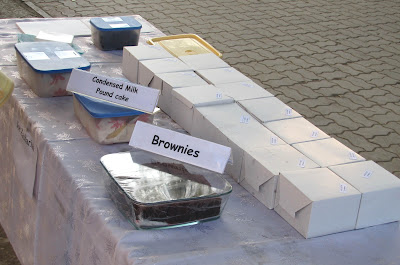 Then there were the young ones and teenagers who knew what a Brownie really meant and how it activates the salivary glands. So here was a boy who kept pulling his dad back, coaxing and cajoling him to buy “just one daddy , only one pleeeese” 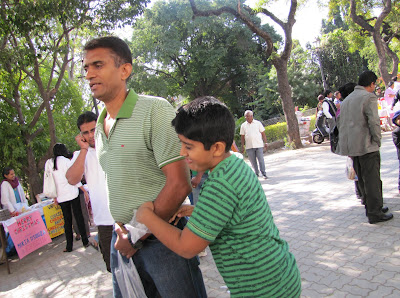 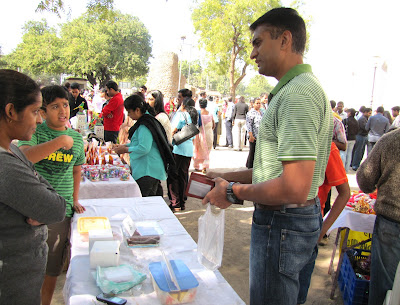 I had to keep clicking without anyone noticing the camera, but this smart girl did spot me, while her parents were busy making the purchase. 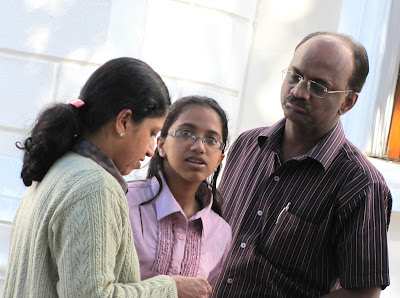 Posted by Haddock at 8:53 AM 44 comments: Links to this post

After reading the papers, I am getting the jitters.
Daily there is some news about some one or the other getting raided based on the connection between that person and Mr Kalmadi.
Poor guy, he conducted the Commonwealth games so well and bagged so many medals, but now that the games are over, all are pouncing on him and accusing him of so many things. Nobody is praising him for the lovely opening ceremony that he orchestrated. How can one forget the lovely and colourful Indian dances that were performed. 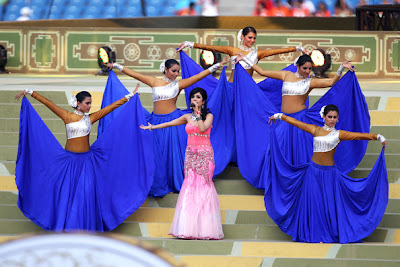 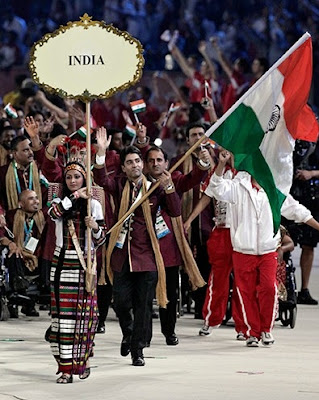 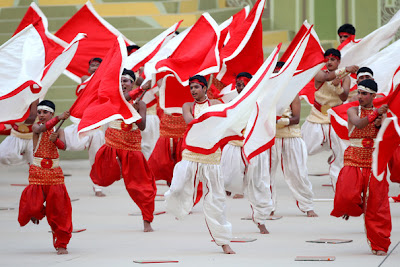 I confided my fears to my wife about the raids that are conducted.
Wifey  “but why are you so worried about it?”
Me  : “you see once upon a time I had given him some money”
Wifey : “What ? and when was that ?”
Me : “in 1975”
Wifey: So long ago? And how much was that amount?”
Me : “Three rupees fifty paise” 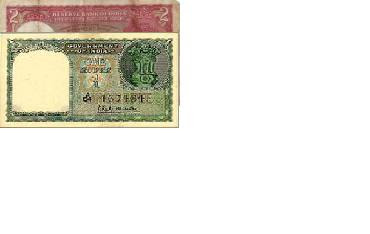 Wifey : “That’s all? And why did you pay him that princely amount?”
Me: “Three rupees for Idli chutney (with sambhar of course) and fifty paise for the coffee”
Wifey: “Now this is all getting very confusing. Why did you have to pay the great Kalmadi for Idli and Coffee?”
Me: “Please correct yourself, it was Idli with chutney and Sambhar and Coffee. Let me explain. I was strolling down Deccan Gymkhana when I saw this Poona Coffee House and decided to get some coffee. Once inside, I decided to have some Idli too. So they served me hot Idlis (of course with Chutney and Sambhar) and with some nice coffee. The bill amount came to three rupees and fifty paise. I dutifully paid the bill at the counter to a man clad in crisp white kurta pajamas. It was only later that I realized that this gentleman sitting at the cash till was none other than the great Suresh Kalmadi who owned the place.”
Wifey: “ Wow you came face to face with Mr Suresh Kalmadi. Now I can tell my friends that my husband met Mr Kalmadi and ….”
Me : “You will tell no such thing. As it is I am worried about having paid him money. What if the CBI comes to some conclusion that I paid Mr Kalmadi with some ulterior motive?”
Wifey: “Wait a minute, do you have the bill?”
Me : “What bill? Oh you mean the one I got at the hotel? No I don't have it. Kamladi took it from me and stuck it on some pointed skewer that he had on his table. In fact there were lots of bills on that skewer. I wonder if all those poor people will get arrested. I hope he has not  destroyed those bills. At least that could prove that I paid him for the Idli (with chutney and Sambhar) with Coffee”
Wifey : “Its just a piece of bad luck that you had to go into the Poona Coffee House”
Me : “Do you know Narayana Murthy proposed to Sudha at the Poona Coffee House” 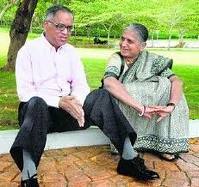 Wifey: “You mean Narayana Murthy of Infosys? Oh my God see where they have reached. If only you too had proposed to me at Poona Coffee House, instead of some lousy place at ”
Me: “You are straying away from the point. Here I am worried about not getting caught for three rupees fifty paise”
Wifey: “You are really turning yourself into a celebrity isn’t it. Last month you told me you had met some one who met Hitler, and now this. I wonder what else you have up your sleeve.
I suggest you keep mum about it and don’t tell anyone that you ever paid any money to any politician”
Me : “and you will not tell anyone that I met Mr Kalmadi. Oh how I wish I had not entered that Coffee house and instead had gone to the Sunshine Hotel next door and enjoyed the music from the juke box ”
Wifey : “Now where in did we have juke box?”
Me: “well that is another long story about my right handed friend who drank coffee with his left hand, but I am not repeating the whole saga again. But you can read it here”
Posted by Haddock at 9:14 AM 51 comments: Links to this post