Excitement of the Vanilla order 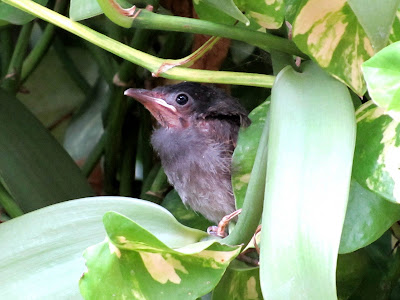 And this one was with the post of the Scaly Breasted Munia. 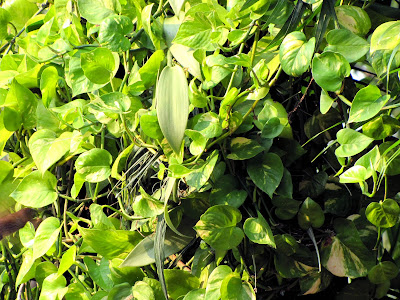 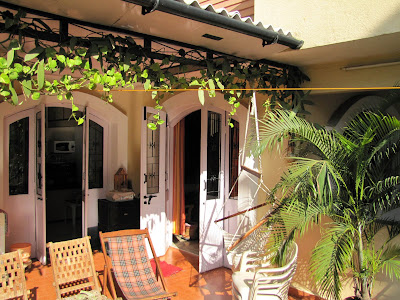 This story starts about 3 years ago when we got two cuttings (about a meter long) one from Palai and the other from Cochin (Kerala)
I vaguely remember someone mentioning at that time that they will start flowering only after 3 years and about the fact that natural pollination will not take place.
So we just planted it along with our money plant and forgot about it.

Right enough, about three and half years later we found clusters of flower buds coming up at some specific locations. 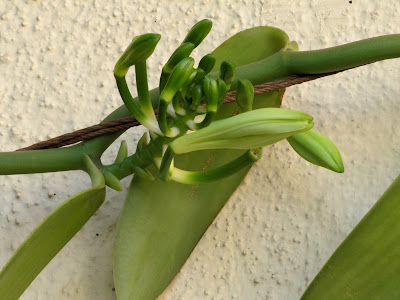 Oh ….. . . lot of excitement. It is flowering, it is finally flowering, but what next? 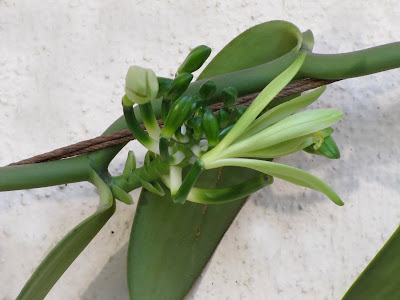 So I logged on to the net and read about Vanilla pollination.
Came up with some interesting facts.
In 1518, while the Spanish Conquistador Cortez was seeking the treasures of the New World, he observed the Aztec emperor Montezuma enjoying a royal beverage of Vanilla scented chocolate. He was so impressed by this kingly drink that when he and his men returned to Europe, they took bags of cocoa and Vanilla along with the gold, silver and jewels of Montezuma's fallen empire.

For more than 300 years after its discovery by Cortez, Vanilla was produced only in its native Mexico.


Plantings were tried in many countries, but the delicate orchid never bore fruit. The mystery was not solved until 1836, when a Belgian named Charles Morren found that common insects cannot pollinate the Vanilla orchid. He observed that a tiny bee, the Melipone, which is found only in the Vanilla districts of Mexico, is uniquely equipped to bring the plant to fertilization. The bee did not survive outside Mexico.


At Madagascar's coast a former slave named Edmond Albius observed these bees very carefully and he perfected a quick and simple method of hand-pollinating which is still used to this day.
Individual flowers are to be pollinated early in the morning as soon as it opens up.


A small stick of bamboo or a toothpick is used to pollinate.


The rostellum is pushed aside and the pollen is spread from the stamen to the stigma causing contact between the two.


Once pollination takes place the flower dries but remains on the cluster. Then slowly the thin stalk behind the flower becomes thick and turns into the pod.


If the pollination is unsuccessful, the flower falls off the next day. 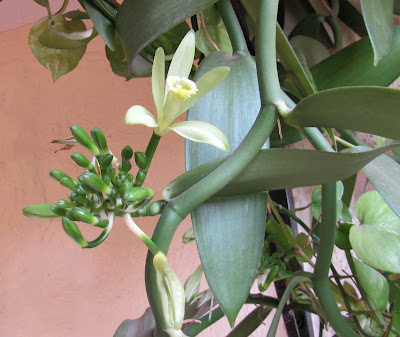 I read some more from different sites and watched some videos related to this and gingerly took my next step of pollination. 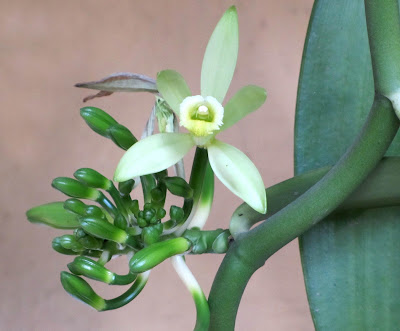 But the flowers were falling off……..


O ho, that is bad news. Tried for some more days but flowers kept falling off.


What is going wrong?


So I tried the new tactic and hey the flowers are not falling. In fact I some how got the vague feeling that the flowers were smiling at me. 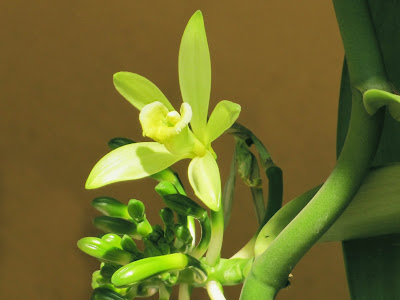 Yahoo…… success…… the flowers are getting pollinated. (Cortez would have been proud of me)


I see now that the stalks behind the dried flowers are getting fleshy and long and developing into beans. 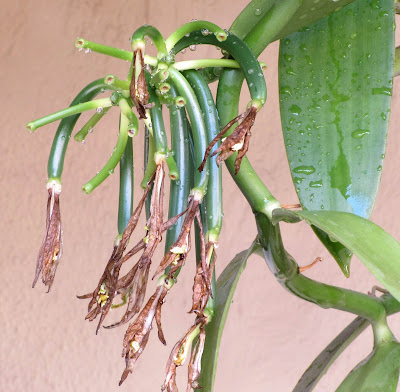 So we wait for the next step.

The bean stays on the vine for two months to reach its mature length before it produces any seeds, and will continue to grow on the vine for another six months until the base end of the pod begins to turn yellow. The bean is then harvested, blanched and sun dried over another two to three months, then the final conditioning stage will take up to three months before it is ready to be sold.


From start to finish, it can take 4 to 5 years to produce just one vanilla bean, thus making it one of the most labor-intensive and costliest spices in the world.


With whole beans costing up to $2 each, extract is much more economical and has a long life in the bottle.

Pollination is an art form and a skill though, and one that develops over time by trial and error.

Pollination can’t be replicated by a machine. In this high-speed age, it still takes human hands, human eyes, a human mind, and a human heart to turn the science of pollination into a labor of love.

A few snaps and a little description about a part of the stay we had in Kerala.
This time it was at Kumarakoum, the place is close to Alleppey (Alepuzha) and is surrounded by the Vembanad Kayal (river) The overnight stay was a welcome change when compared to the earlier stay at Thekaddy and many of us were of the opinion “lets stay here only and not move from here” May be they were taken in by the view of the lake right from their door way and it was peaceful and calm. 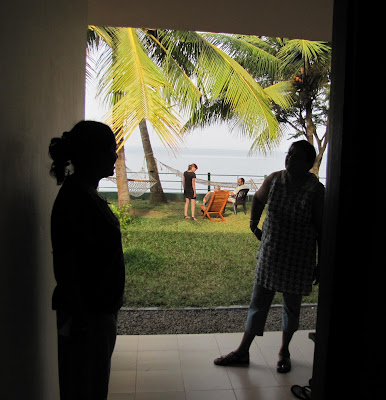 As soon as we landed there in the morning, the pre arranged house boat picked us up for our day trip.

The house boat is a thriving business now in the Alleppey backwaters and you will come across many in the lake. A four to six hour ride (with lunch in the boat) is what I would recommend.


The crew were friendly and they laid out some good dishes for our lunch. As you can see there was Fish fry, Sambhar, Sear Fish Curry, Cabbage Thoran, Brown rice, More Curry (made out of curd)  papaddam and Salad.  Of course if you are a group of pure vegetarians then they will take special care that only vegetarian food is cooked and served in the boat. 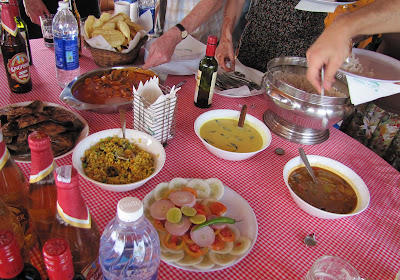 As if this was not enough, later they were good enough to anchor at a nearby local eating joint along the coast where we could get some Kappa (Tapioca) with mussels 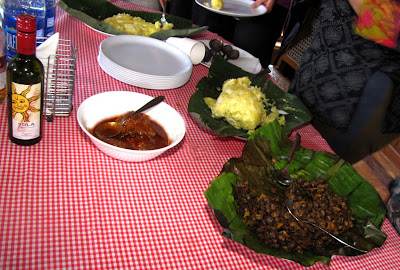 Cruising down we did see some local life and their daily routine, Their movements depended on these small boats. 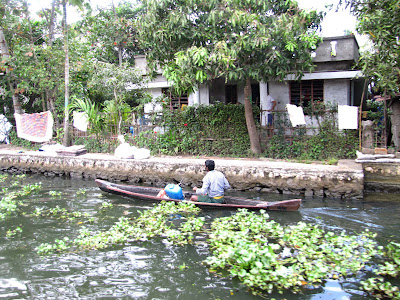 After lunch practically all dozed off and were woken up by some nice hot tea/coffee with something to munch. There was self-entertainment too and all took turns entertaining others. 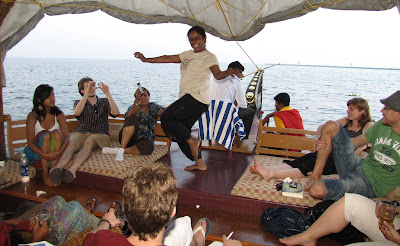 We made a U turn at the finish point of the Nehru boat race which takes place every year on the second Saturday of August. Saw one of those boats there, but that was not one of those which were traditionally made. 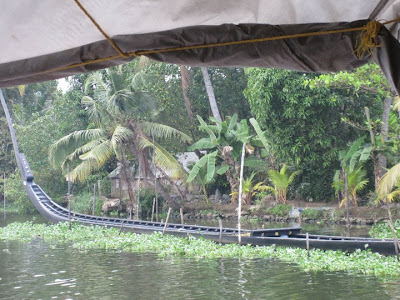 They say that the traditional boats that are used in the race are hand made, by tying planks together by rope. No nails or rivets are used. They are seasoned using natural products. There are no drawings of the design of these boats, but the design is handed down verbally through generations. No grease is used but the white of the egg is smeared at the bottom so that it skids on the water during the race. Many years ago (I think it was in 1968) I had the opportunity to actually see a race live and it is a real experience. As for these houseboats, long back these same boats (known as kettuvallams) were used to ferry grain from the fields to the mills and market. Waterways was the major mode of the transport in those days.
As more and more roads started coming up, and the cultivation of rice dwindled, these boats were lying idle and the tourist industry found it lucrative to convert them into house boats. 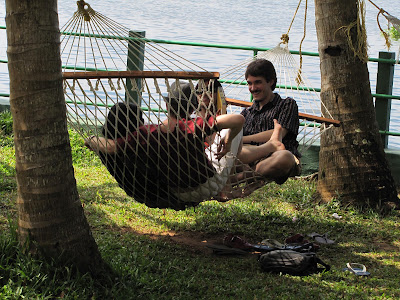 We were back at our cottage before sunset and lolling out in the hammock was something all preferred.

The complete arrangement of our stay at different locations in Kerala was made by Mr John.
One can contact him at his site  http://www.tikholidays.com/  or just dial  +919387827235

To see more pictures of the stay at Kumarakom and the house boat, I have made a video of the same which is below. I have used about 100+ pictures to make this video.
To enjoy it, allow it to buffer completely first and then replay it (with the volume turned slightly high)