I had two coconuts to grate so I selected a bigger plate for the job. While grating my thoughts kept drifting and I was wondering "is it the same plate?" 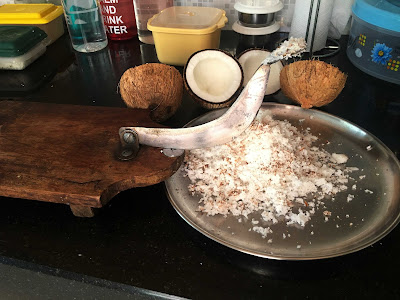 Once I was through, I emptied the plate, flipped it and had a closer look at the bottom. Yes, the marking was there. It was 30 year ago that I got this from my employer. They had distributed it to all the employees on the completion of the millionth vehicle. The old emblem also could be seen (The present Tata Motors was known as Telco in those days - Tata Engineering and Locomotive Company) It was very difficult to photograph it as everything was almost worn out after 30 years so I had to dust it with some talcum powder, and then enhance it a bit in Photoshop so that one could read the inscription. 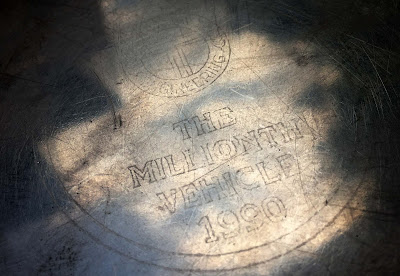 The coconut scraper too was pretty old and has seen better days (about 40 years old) There was a formation of a dent where the metal blade rested on the wood, so I keep a coin there to avoid further damage. 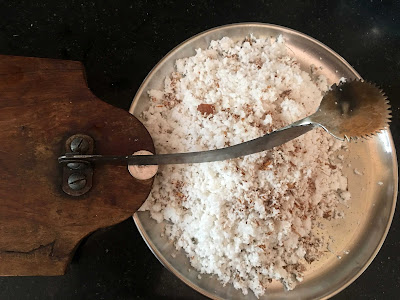 The scraper in this open position reminded me of Mrs Kelkar, our old neighbour in Bombay from the early 60s. I remember her advice to her daughter वापरात नसताना ते बंद ठेवा (when not in use keep it closed) A simple safety advice which goes a long way. 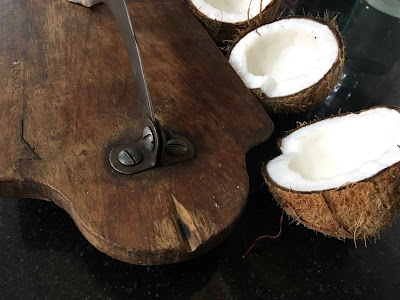 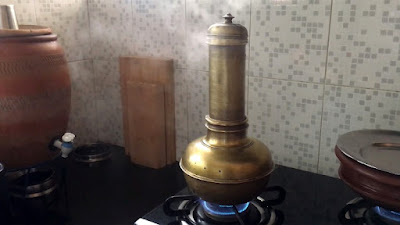 The song in the video is by Dr Akhila Alexander. 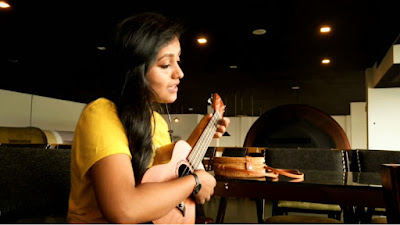 Couldn't help with the train of thoughts while grating.
Posted by Haddock at 5:16 PM

You are using historical items, interesting!

Ah the lovely grater.... and capturing the inscription is just awesome.. didnt know it myself after all these years that this plate had such significance... Thanks for sharing pa.

Welcome to older years and reminiscing.

It's the type of activity that allows the mind to wander at will, and you never know where exactly it is going to take you.

It's good when the tools have a history.

Thanks for sharing your thoughts and memories, pleased that these older items are still in use :)

All the best Jan

Ah! What a pain it is to grate coconut, but how rewarding it is to eat the stuff in various forms, most notably chutney. Having lived next door to Mrs Kelkar, what I remember most is the wonderful aromas wafting from her kitchen and the delicacies she plied us with on festive occasions. Those were simpler times when, as a child, you could walk into a neighbour's house and be offered a taste of whatever was cooking.

Fond memories but as Christine pointed out these are not in vogue. Well polished they serve as curios

I made a coconut scraper for my wife a few years ago. But mine is fixed and doesn't fold like yours. I hang it in the pantry.

There's something very special about using old tools, isn't there?

That's the sort of coconut grater we have in Kerala.
You still have it because it's so old. New tools go bad very fast.

Great story. It would make you look forward to grating a coconut!

I've never had fresh coconut! I love this story!

Sweet memories!! We used to have this coconut grater in different shapes. One question Joe Chetan, did you manage to sit on it and grate?
Every occasion was engraved on vessels and they take your memories back to those days!!

Right Jinsy. One had to sit on it and do it. We usually keep it on the kitchen platform and do it so that the legs are dangling down. The more agile and young ones can do it by sitting on the floor. This is multipurpose and the middle portion can be used for cutting meat etc