Stumbled upon these wonderful paintings.


These were from the collections of Carlo Vinci. The site says that these photographs were among his prized possessions. They are from the turn of the century reproductions of the paintings of Eduard von Gruntzner who was born in 1846. I wonder if you noticed the one common factor in all the characters of these paintings.


The family of Carlo Vinci isn’t quite sure where Vinci obtained these photographs. But he was crazy about them because of its realistic nature.


I too was looking at each of these paintings and was in awe of Eduard’s eye for details.


For example the one below has this monk holding the candle light stand in his left hand, something that he will require once he goes to the cellar below, and there is something hanging from that stand, probably a scissor to cut off the extra wick? The one with the walking stick is perhaps trying to cajole him to get some extra  wine to his room.  The walking stick has a tip at the end, probably to reduce wear and tear of the wooden stick? The one behind could be hard of hearing. 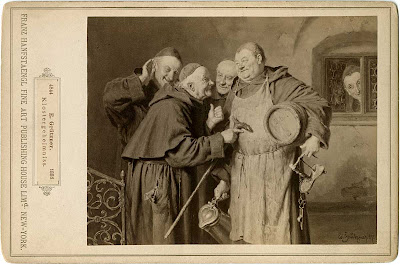 And this one here. At first glance it may look like a barber shop, but on closer look we realize it’s one of the rooms in the Abbey (the photographs, the crucifix  etc indicate that) where the barber comes for his “visit” and the monks wait for their turn to be shaved. Each one gets his own towel to be used as a bib. The monk on the right has finished being shaved and wiping his face after having a wash in the basin which is visible. I am just wondering why that jug is placed so high on a shelf where no one can reach easily? One monk is being shaved while another one is lathered and waiting so that the lather will soak in, the third one is waiting with his “bib” in place.


The one standing behind is probably showing the nick he got last time. 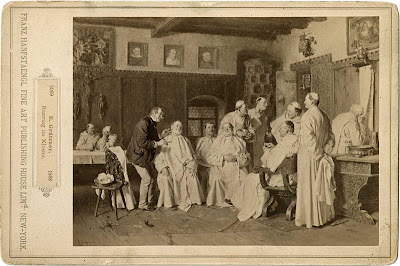 A little bit of cheating in a game of cards.  I like the way these three legged stools are converted to chairs by wedging in those carved wood as the backrest. They may look crude, but they are sure to be steady. If you see the chair missing for the person on the right, its probably because he is sitting on the protruding ledge of the wall. 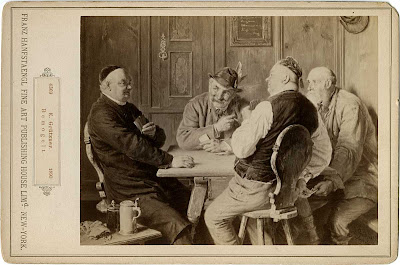 In the Dominican cellar - The monk in the forefront, his body stance-bend slightly backwards and a little to his right (with his right hand fully extended) shows that the jar is full and heavy.


The monk on the ladder, probably checking the clarity of the wine in the goblet against the candle light. 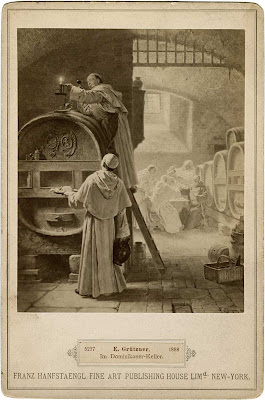 A rare tidbit – The hunter with his “kill” probably trying to show off, or may be haggling with some eating joint to buy his wild boar. The erect stance of the hunter and the bowed position of the one behind him indicates the master servant relationship between both?  The hunting dog is really curious about the “snuff” that one of them is about to use. 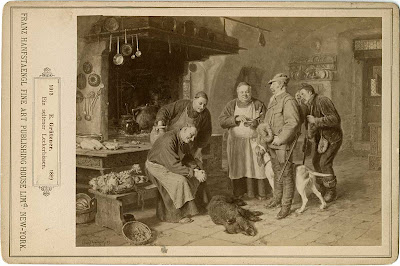 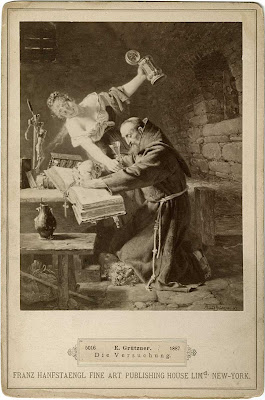 This is the only painting in which I don’t find the painter’s signature, or am I missing it? 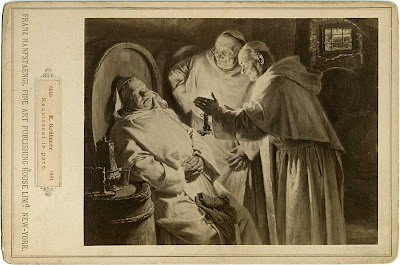 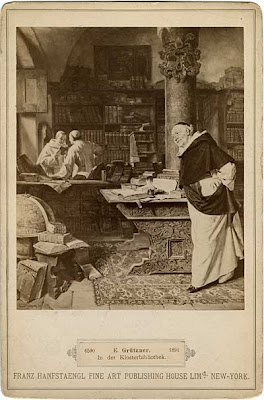 No wonder Vinci considered them as his prized possession.


I found them in the net at this location (click here) 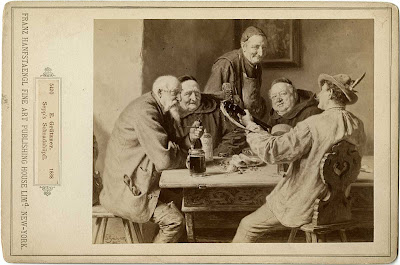 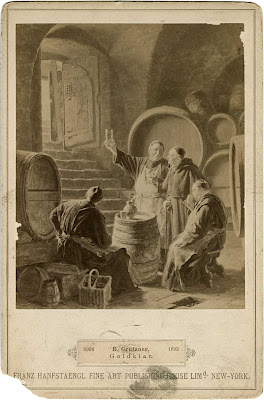 Oh yes the common factor – all the characters in all these paintings are smiling.
Posted by Haddock at 7:08 AM

The paintings are awesome!

This is such an enlightening post. Have never seen these paintings before and loved the eye for detail in each one of them. In fact that's because of your observations and commentary! Thanks for sharing! :)

Wonderful observation of the minute details.
Great paintings no doubt and a superb post.

They all depict "slice of life" scenes and provide a window into a different time and place. Wonderful!

I guess s different school of paintings from the Rennaisance paintings we often see.
The colour gives it an ancient look indeed.

If not for your observations I would have missed out on all the details highlighted about the painting here. Wonderful.

Such bonhomie is definitely attractive. Lovely paintings. Thanks for sharing.

in fact you have done a wonderful job to write a neat write up on these paintings...

Beautiful paintings, loved the attention to detailing in each of them and of course, the common factor makes them even more appealing. Wonderful find and share, thank you :)

Wow, really cool! I love that there are smiles in all. :) I need to come back to visit when I have more time. I want to look thru all the details.
Hope you have a great week!

I haven't seen these pictures before and as I was scanning them, I was smiling. I realised that all the characters were smiling only when I chanced upon your writing saying that all of them were smiling.

I love the way you have described each picture and your interpretation of them !

How interesting. I really appreciated your eye for detail, too. They are all smiling...how wonderful! Thanks for sharing!

They are indeed very detailed. I would love to see the actual paintings. Thank-you for your comments on my blog.

Don't you have an eye for details! Wow!!

These are very impressive paintings (they're almost like photographs. They are images that tell a lot of stories.

The way you look at them is very inspiring. It makes us want to be more attentive to paintings. :)

What a beautiful and quirky find! I love all of the detail.

Thank you for this post! What a treasure. I love the painting and intend to visit the site where you found them immediately!

what interesting pictures. You really have to look at them closely to unravel the story. and yes they are all smiling!
Have a wonderful weekend. and thank you for stopping by my blog today.

These are wonderful. The detail is so clear.

I really enjoyed looking at those pictures!

At first I thought they were photographs. Very interesting info you've given us here. Many thanks.

Very interesting photographs. You did a great job of telling the story that each one tells.

Thanks for enlightening me with Carlo Vinci. i admit i had not heard of him before. Now i am googling to know more. One great aspect about ur post is that just like a kind teacher you are able to guide students like me to what i could have missed or perhaps overlooked. Thank you again for that.:)

How in the world did you "stumble upon" these paintings!? Do you even remember?

Based on some of your other posts, I can come here and always find the unexpected. :)

Thanks for introducing me to Carlo Vinci. Fascinating art and your observations were interesting to read. Yes, everyone is smiling. :)

They look like pictures of old paintings to me, but his presentation adds all the more to them.

Clinging to my Memories :) said...