Black Kite and the chicks

It is not everyday that you get a ringside view of what is going on inside a bird's nest. That too a Black Kite's nest. 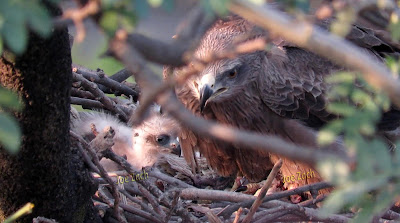 Happened to see this nest from our kitchen window, and from the terrace the view was perfect. 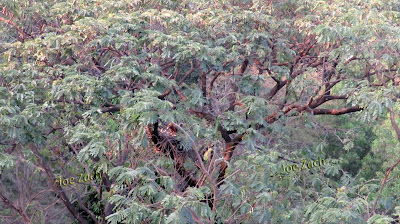 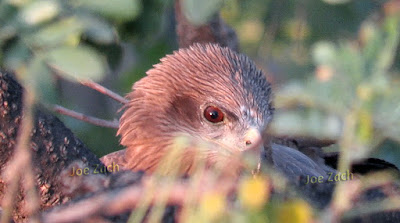 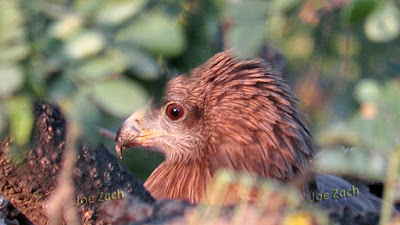 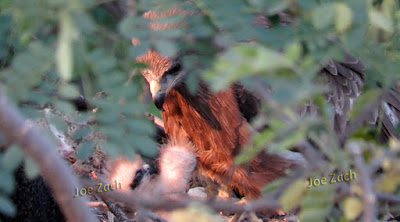 Noticed that when the Kite fed the young ones, she broke up the feed into small morsels and fed the chicks alternatively ensuring that there was no overfeeding. 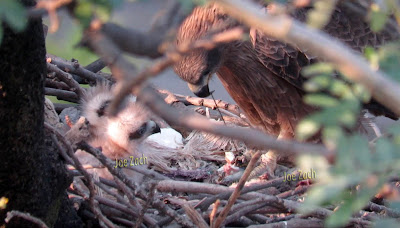 All the activity went on in the nest with the accompaniment of cacophony from the rose ringed parakeet. 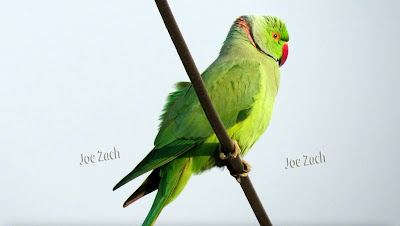 The coppersmith barbet produced the intermittent tuk tuk sound. It is interesting to note how the barbet makes the sound. The beak remains shut during each call. A patch of bare skin on both sides of the throat inflates and collapses with each tuk and the head keeps bobbing.  ( in the video at 2:46) 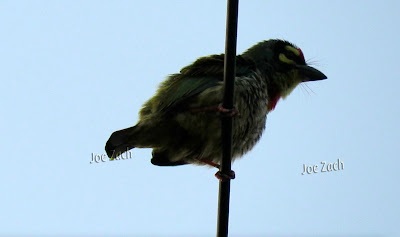 The Crow Pheasant (Bharadwaj) was prancing on the same tree but on a different branch. 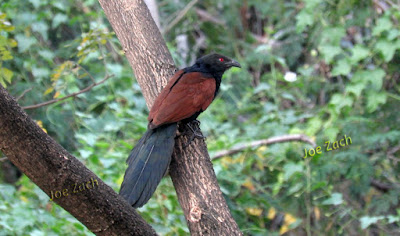 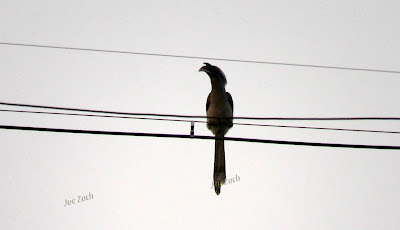 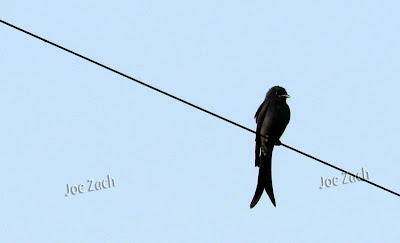 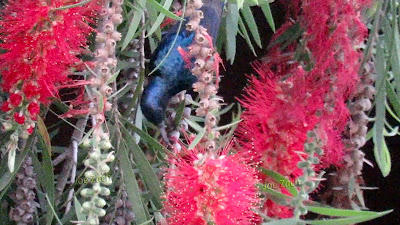 While the mother bird sat with the chicks, she sent out a small bird call (typical of the kite family) by just opening the beak a wee bit. You will notice it if you listen with a earphone (at 5:53 in the video) 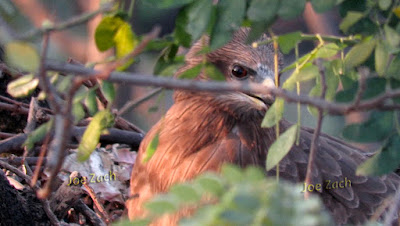 The male makes frequent sorties to replenish the food.  In one  such sortie, I found that he had got a large piece of thermocol. Obviously he could not have mistaken it for food for the young ones. So I am guessing he got it to line the inside of the nest. 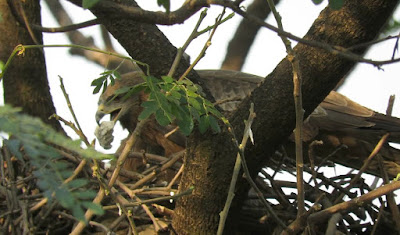 I did see another piece of thermocol on the floor of the nest, probably placed there while building the nest. 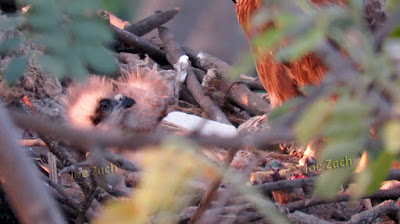 I shudder to think the harm it could cause to the young ones if they ingest it - the harm caused by man made waste which was not disposed properly. When it is not feeding time, she gathers the chicks under her feathers, maybe to keep them warm. 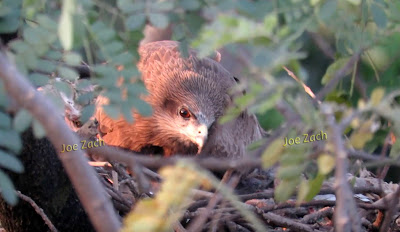 It was interesting to observe the mate waiting for the next call, and yawning in between. 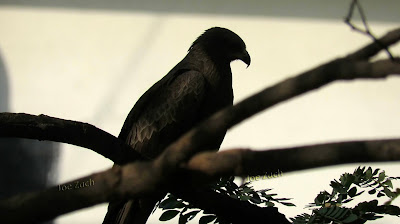 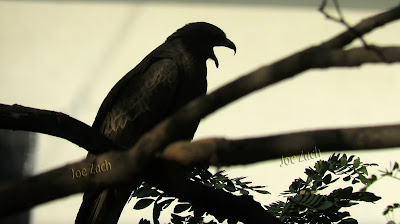 If I get more footage, I hope to make part two of the video (till the chicks fly away)
Posted by Haddock at 12:44 AM

It always amazes me to understand - How Joe must be think rather observing the things around him. His mind & thoughts are equally fast as the shutter speed of the flash of his camera, to capture the photos & videos but to make the narrative so easy as to make the story telling in person. Whenever I read your blogs Joe , I can hear your voice while I read it. You are my favourite story teller. Thanks for this blog.

Thanks Augustine. Like you said, as I click the story keeps developing in my mind. Hope to capture some more story from the same nest 😊

India really has great and such interesting birds.

How you have the skill, the patience and the speed of reaction to capture these images we have no idea. But, they do make for incredible viewing. We can certainly say that looking at these pictures in the warmth and comfort of our apartment instead of lying in wait in a 'hide' in freezing temperatures on the off chance of a sighting makes seeing these birds at close quarters a real joy.

How wonderful Nature is in all its tiny details. Thank you for revealing a few of its secrets here.

We have a blue bird box in our yard and we enjoy watching the progress of their life cycle but I would prefer to do it from afar so not to disturb them. About the closest I've come is that there are several nearby eagle nests with cameras and the feed streamed to the internet that I watch from time to time.

Joe, the pictures and story are amazing. I dont have the patience to capture pictures of wildlife and appreciate those that can bring the beauty into my life. Birds are amazing parents.

Very cool. The birds in my yard are beautiful and fun to watch, but compared to yours they are boring!

you have some beautiful birds there - it is worrying that they will pick up bits of rubbish due to the carelessness of man.... the birds here (not very colourful) like the fur I brush from our cat, they probably line their nests with it :) as I put clear the cat brush out on the lawn.

What amazing shots! I think I like the crow pheasant the best. I just love the red wings on the black, plus the red eyes are so cool.

Dear Joe,
The blog and the photos are inspiring!
Thanks for sharing the photos and the uplifting video clip!
Warmly,
Bharat Wakhlu

You know how I love the birds and watching them go about their daily lives - in fact it's becoming a bit of an addiction lately and I'm sure people are tired of my many garden bird photos!

Thank for sharing these great photos and the video. What beautiful
creatures they are.

Wow! I'm really impressed with these photos you took. The raptors are such amazing birds.

Boy, you really do have a bird's eye view. It's wonderful seeing how the birds take such good care of their young. Thanks for sharing.

These are lovely photos and the video is great. That wretched crow pheasant is found of eating hatchlings. I hope those baby kites are safe and growing fast. - Dr. Nandini Ramachandran.

I especially love that green parakeet! Of course, I am a sucker for green.

Shared with 2other bird lovers ,one in Chennai and the other in Kalamazoo.Simply amazing.

Nature abounds with beauty if only we observe keenly to the minute details as the author has done. One need not go to forests or sanctuaries for watching the birds as they reside around our houses also. It just calls for an abiding interest. Looking for the second video soon.

Ohhh you are so fortunate to be able to have this view. It is a beautiful thing to watch nature.

Your blog has quit showing up in my reading list. Got to figure out how to fix that cause I love reading your blog and seeing your fantastic pictures.

Blogspot is acting weird these days. I too stopped getting the comment intimation these days.
You can send me your mail id to joezach54@gmail.com and I will intimate you whenever a blog is published.

It is so fun to watch the bird family from your kitchen window. You've captured some great shots of them. I bet you'll be excited to see the little birds grow and fly away from the nest. Maybe a new family will move in next spring and you can witness this beautiful act of natural all over again.