When wifey told me that she wanted to stop over at a cheese making factory I pictured it as some great factory with lots of machinery and many employees working in it.
My imagination worked overtime and transported me to the world of  Tom and Jerry my favorite  cartoon movie series. I imagined those slices of cheese with huge holes in it and Tom chasing Jerry who was trying to get away with a huge piece. I pictured myself waving back at Jerry when he would look at me cheekily through one of those holes and wink. (Sigh!) 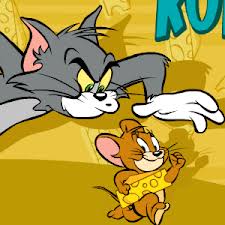 But all these were just my imagination.
The La Ferme Cheese factory at was a simple little place. It is not far from Auroville Ashram and is  run by Mr Benny who was kind enough to  show us around, despite being held up for his lunch. Benny hails from and stays with his family in Auroville.
I was impressed by the simple sign board at the entrance.  A slice of wood on which the name was painted in white paint. No fancy stuff. 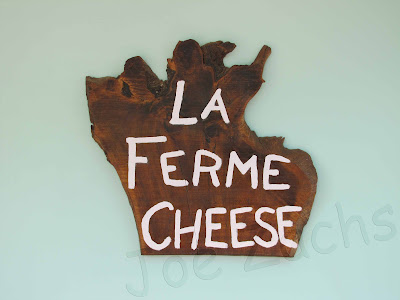 Outside I saw these huge black structures, which was the Bio gas plant. He told us that the gas that was used in the kitchen were from these Bio gas plants. 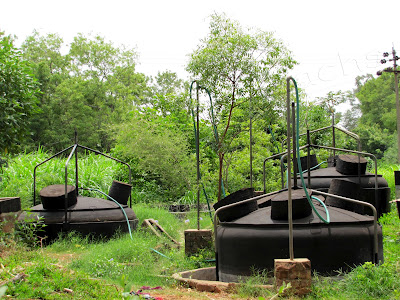 As for the Tom & Jerry affair, he told us that they were the Swiss cheese with ‘eyes’ The larger the eyes, the more pronounced its flavour will be.
There are so many types of cheese, like the Provolone cheese, the Govda cheese, Farm cheese, Blue cheese, Cheddar cheese. 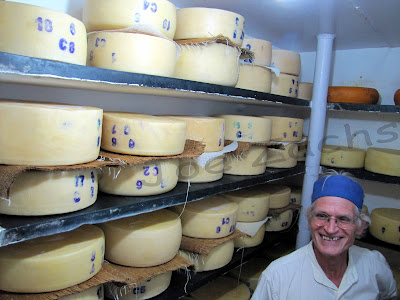 Among the hard cheese are the Parmesan, Gruyere, Romano. 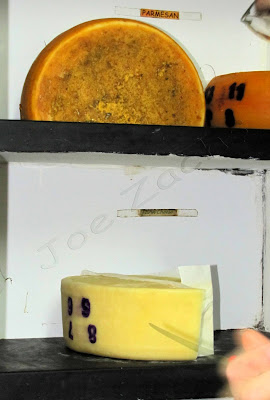 All these sounded Greek to me, and talking about Greek, the Feta cheese is cheese actually from . It is made with a combination of Goat and sheep milk. 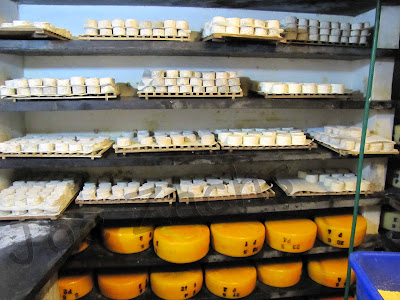 (that is cheese with goat milk)

I was impressed by the way Benny kept his place neat and clean. He gave us a tour of the place which included sections where the milk was collected in huge containers ,the  processing of cheese , testing of samples and the storage of the finished product was done. 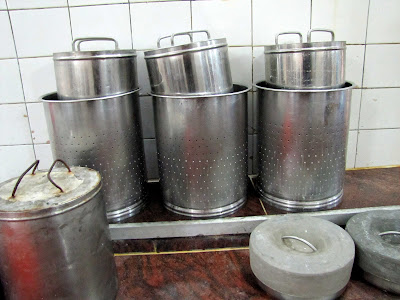 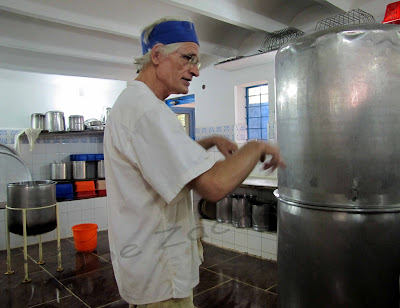 He went to great details about the shelf life of each variety and  gave us samples to taste. 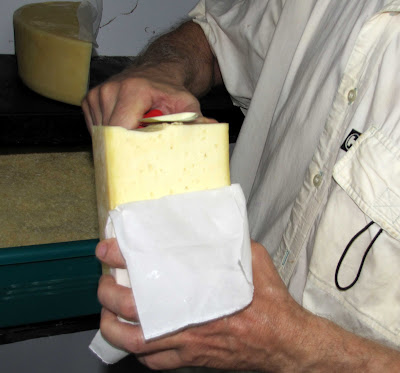 carving out a slice for tasting

Though most of the cheese were made with cow’s milk, they also  made goat cheese. Despite having their own cattle , the milk for the cheese was also sourced from the nearby farms , to meet the demands of their ever increasing clientele .
The cheese  products are available to customers in the local markets and also in Auroville outlets. Though they do not sell the Cheese at La Farme, Benny was kind enough to make an exception for us ........ as  my wife  was so keen to buy the Parmesan cheese, that she kept  persistently requesting him. 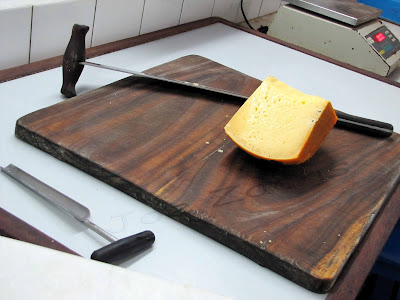 (some of the tools for cutting the hard cheese)

I saw these colourful soldiers all lined up on a shelf and was wondering what they were doing up there. When I picked up one to examine it, I realised that they were the number stamps used to mark the cheese. 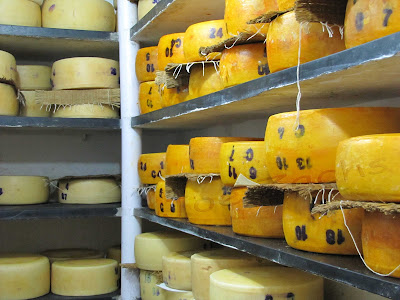 While we were there , a prospective client dropped by to meet Benny  to discuss  an order that he wanted to place. This was my cue to move on as I could see that Benny was going to be even more late for his lunch. 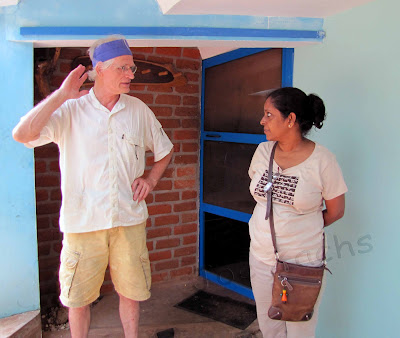 He was happy that I was taking photos of his place. When I told him that I will be writing a blog on La Ferme Cheese, his eyes brightened up and said with a smile “do send me the link” 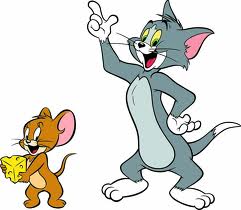 PS: After we send the link to Benny, this was his reply:

Hello Marie and Joe,
Sure I remember your visit, but what a nice surprise to see and read the article. Great pictures and a very nice story.
Thanks! This really more than makes up for a late lunch ;-) and looking at the pics I don't think I was so hungry anyway :-)
Best Regards,
Benny

I wish La Ferme was closer to me. Great tour, thank you!

a cheese factory sounds like a dream come true.....

would love to visit this place.

I love me some cheese! Although I am an honest man, I might be tempted to pilfer a slice of cheese from Benny when he turned his back! lol

All kidding aside, that was a nice place to visit I'll bet. Speaking of cheese, it has been 3 years since I have had some great jalapeno cheese!

I visited Pondi last December; would have definitely visited the place if I knew about it :(
Good job with the pictures and descriptions. With your posts, it's always like experiencing it all yourself!

wow!! that was interesting and informative.. we visited auroville last may, but i had no idea there was anything like this nearby!! next time for sure!

Caught up with a lot of your posts today and enjoyed them much! I have never been to a cheese factory, the pics are lovely and very well support the information you shared,,hope you could differentiate between tastes!

As a Wisconsite, I am a loyal fan of cheese. I have been to several cheese factories, and I usually try to get my fill of cheese daily!

So many types of cheese , wow I had no clue about it all

Beautiful story of cheese making! I can relate as I saw a similar factory at Gruyere in Switzerland:)

I did not know we had cheese factories in India. Thanks for sharing your experience. It was an interesting read :)